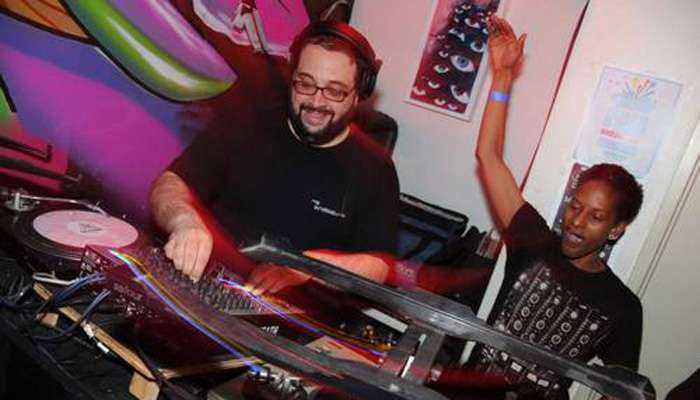 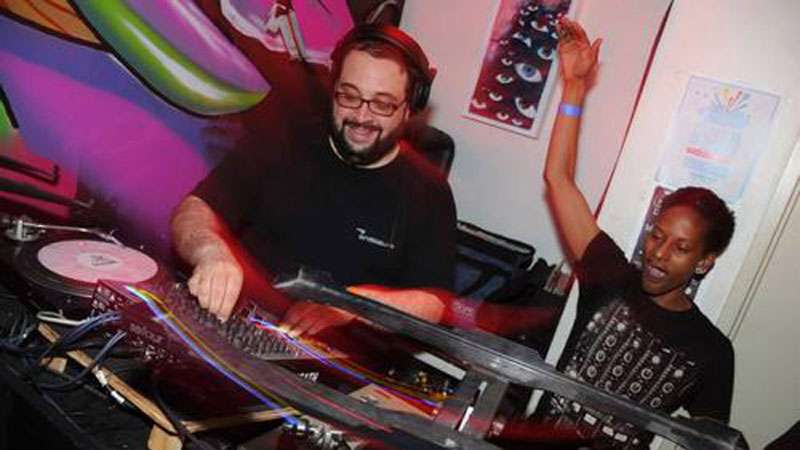 San Francisco underground don Michelangelo Battaglia is known simply as “mike bee” to his friends, legions of San Francisco dancers and record store patrons at first Amoeba and now Vinyl Dreams. He is a San Francisco treasure that has spent his adult life dedicated to furthering dance music culture. Mike is returning back to the AYLI fold, closing out the chill-out loft for AYLI presents Freaky Friday w/ Maya Jane Coles & Cosmin TRG 11.01.13. In preparation for the upcoming party, Mike took a moment to answer questions from AYLI family member William Wardlaw, who’s also on the bill in the chill-out loft, and record an exclusive podcast for us.

You have been involved in music journalism for publications like XLR8R and Urb. What current music commentary do you consider essential reading?

Well I was a voracious reader of the music press growing up, starting with Rolling Stone and Spin, then discovering the NME and Melody Maker in high school in the late 80’s, rave zines like Under One Sky, more upmarket UK mags like Muzik and Jockey Slut (I was also a big Select fan), and of course XLR8R and Urb. I am a packrat and have a huge collection of this stuff crammed into my apartment. Since print media has all but died out there are a ton of sources but I tend to read things that are very focused on what I like, and I feel less informed about the culture as a whole as a result of that. I felt the Infinite State Machine blog (infinitestatemachine.com) is a great resource for a slice of the dance scene that’s both innovative and just plain good. FACT has been great from when they were a little 10”-sized magazine and I still check them from time to time, although their wheelhouse is considerably more closed off as time has moved on IMO. I’m a massive fan of the Test Pressing blog (testpressing.org), which is a one-stop for all things Balearic & a great place for articles on classic club culture, which I love dearly.

As the buyer for Amoeba SF’s electronic music section for 6 years you were able to influence the records that were recommended at the store. Which sounds or labels did you especially showcase?

I basically curated that section during my time at the helm. I chose what the store carried, what we recommended and highlighted, and I encouraged staff to do so as well because I wanted the section to be a reflection of those who worked in it, not just ‘what Mike Bee likes’ or whatever. It was important to me that we all had a voice. I feel that the record store, especially one the size and scope of Amoeba, is a place where trends and genres matter, so I made an effort to stay on the bleeding edge of the culture, whether that was heavily promoting 2-Step/UK Garage and West London Broken Beat in the early 00’s, Dubstep when it actually had dub in it, the new Disco revival (we were pushing Lindstrom in 2005!), and in my final few years there, the upsurge of post-dubstep Bass music coming from the US & UK. We championed labels like Feedelity, Warp, Hyperdub, 2000 Black…I could go on and on and on.

You’re known as a DJ with an incredible scope of music knowledge and range. Do you concern yourself much with genre classifications when selecting records for a night?

While I think genre is important when shopping for records, I feel it has almost no value outside of talking about music. When selecting I have my own personal organizational methods (IE scattered across my living room floor) and tend to organize things in my head according to tempo or vibe. If you come to, say, Housepitality on a night when I’m playing in the back, you’ll hear slo-mo house, disco edits, straight-up disco, so-called “drug chug”, Balearic standards, african funk…basically anything that fits in between 98 and 115 BPM. My DJ guru, Balearic Mike, has been imploring me to ditch using tempo as guide during my sets, and I’ve been experimenting when I can with selecting & programming as opposed to beat-matching & staying within the BPM box.

DJ’ing is a practice and I feel I’ve evolved greatly over the past 20 years, but I never really feel like I’ve mastered it.

What inspired you to start Vinyl Dreams, which began online and now exists as a great record shop in the Lower Haight?

Well I was approached by Darren Davis, the former owner of Tweekin’ Records during its 10-year heyday, with the idea of partnering up and opening our own shop online back in 2010. Our partnership only lasted a year or so, but I picked up the mantle and moved forward in a solo capacity. I never really thought the shop would move into the brick & mortar realm, but the opportunities presented themselves such that I would have been a fool to pass them up. Now I find myself in the same space that Darren ran Tweekin’ in, and with his blessing we’re going to make it a focal point for the dance vinyl scene in SF.

It must be interesting to see the variety of people that come in to shop for vinyl. Other than DJs, who buys a lot of records these days?

I’m very happy to say I see a whole new generation of younger folks discovering the world of dance & electronic music on vinyl. Other than DJ’s we simply get connoisseurs of the music and a few folks from the area who are new to the whole scene and want to know more. It’s very encouraging and inspiring to see so many people get excited about vinyl. Plus I’d say a full third of our stock is vinyl-only with no digital equivalent, and people are getting hip to that.

You have a background in drum ’n’ bass and jungle. Do you wish this sound had more support in the Bay Area? Are you surprised that dubstep and trap seem to dominate the bass-music scene here?

Having been a part of SF’s Jungle & D&B scene in the 90’s, I’m glad to have been there during an incredible time for music and for SF, but things done changed, as they say, and I can’t say I’m too interested in where Drum’n’Bass has gone over the last decade or so. Dubstep’s foothold in SF – and to a lesser extent, Trap’s – is a direct result of the incredible participation level in our D&B scene. I don’t think you would see quite the level of support for either of those genres without the groundwork laid down by their D&B forebears. Whether you were rocking out at Eklektik or Compression, or my own little neck of the woods on Saturday nights at The Top, it felt vibrant, essential and like family. So I’m certainly not surprised that both Dubstep and Trap are popular here, even though I definitely hate the anti-dub bastardization of Dubstep and think trap is just boring.

Since you’re always ahead of the curve, are there any sounds or groups that haven’t broken yet that you think will be embraced more widely in the future?

Wow, you’re putting me on the spot here! Time to put my money where my mouth is…Tornado Wallace is on the come-up, Psychemagik spent the summer leaving entire festivals destroyed in their wake…Daniel Avery’s album that just dropped is spectacular, if he isn’t the name on everyone’s lips in a month or two, I’ll be shocked…Special Request is about to bring hardcore & jungle back in a major way…Honestly, though, ‘next big things’ don’t really interest me at all. I’m increasingly more excited about the renegades, the guys who go all-in for this culture because they love it and can’t live without it. ESP Institute is one of the best/coolest labels in the world right now, it would be great if they were to get a much larger audience.

You’ve performed with many top DJs over the years. Who stands out as a highlight that you’ve shared a bill with? Is there one artist you’d most like to perform with in the future?

Honestly, I much prefer playing with with friends and likeminded locals than with big out-of-town guests. I’ve had a blast playing with the likes of Dego Macfarlane, LTJ Bukem, Dan Bell, Recloose, DJ Tricksta, Ryuichi Sakamoto, Seba, Benny Ill, Seiji & all the Bugz in the Attic…but I think the most fun is with peeps. Myself & Joel Conway in the backroom at Housepitality, with Jason Greer as The Pair Extraordinaire or tagging with Gabe Real, DJ Sea & WishFM at The Top…those are some of my favorite memories.

You’ve had the opportunity to play at the Sunset campout over the past few summers. How do you approach organizing music for a daytime outdoor set differently than a club?

I love playing outside and I love the Sunset crew for giving me the opportunity to do what I do for an appreciative crowd. To say that it often is the highlight of my year isn’t hyperbole. I’ve actually played for them quite a few times, including opening the camp-out at Camp & Sons in Willits back only a week or two after 9/11. Intense. As for my approach, it’s well Balearic, innit? Anything that sounds good on the beach, I love and much prefer playing down there. Environment and time of day are key, my duty as I see it is to soundtrack your afternoon in the sun. For me, I feel like it gives me a chance to stretch my legs a bit musically and put together a narrative that can still function as party jams. I really honestly try to not think about it too much outside of the initial selection, which keeps it fresh for me but sometimes I take a risk & fall on my face, which is just how it goes. There has to be some spontaneity.

The difference between the beach at Sunset and a club is that you can play weirder, softer, more nuanced music at Sunset, but I manage to play that stuff in a club anyway!

How would you like Vinyl Dreams to grow in the future?

Well I’d like it to be financially solvent. I wouldn’t be upset if it became something like Phonica in London or even Piccadilly in Manchester – very well rounded in terms of scope. More than anything, I’d like for it to be a hub for the local scene where people can hang out and talk about/experience this music & culture outside of a nightclub environment, or even outside their home. People love having a place to go to chat about and discover new music. I want Vinyl Dreams to be a content filter. We don’t carry everything, but everything we carry is going to be good. Buy more records!