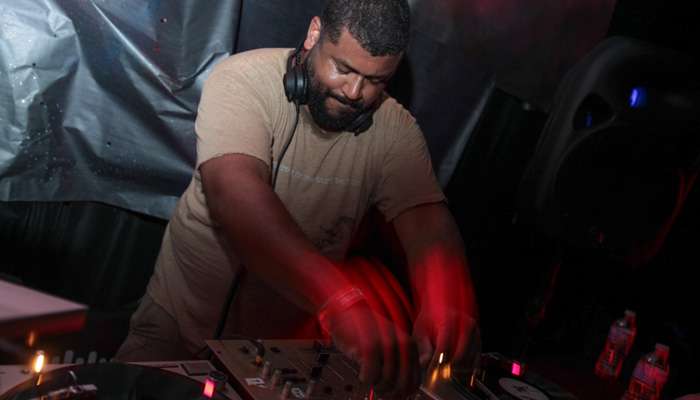 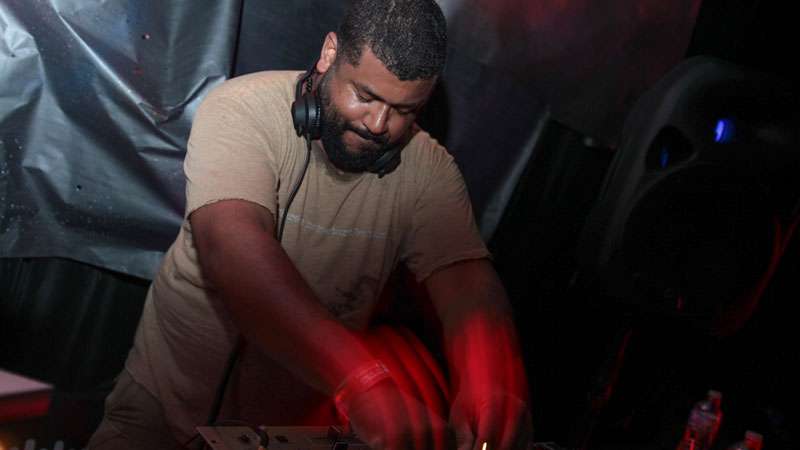 We were late to the Carlos Souffront bandwagon. It wasn’t until 2011, shortly before he moved to San Francisco, that we first discovered Souffront through our friends at Honey Soundsystem. Since then he’s become a secret weapon of sorts that we do our best to work him into appropriate line-ups. His time in Detroit and the influences he brings to a night are unparalleled by existing San Francisco DJs. Simply put, Carlos drops bombs. A DJ’s DJ of the utmost.

We’re honored to release this exclusive mix, an excerpt from a recording at Plunge, September 14, 2013, and an interview of Carlos by The Bunker resident Derek Plaslaiko in preparation for our upcoming collaboration featuring Bunker artists Voices from the Lake.

Along with being a resident of The Bunker, Derek was asked to interview Carlos because their relationship dates back to the early 90s. “Carlos has always been one of my 3 favorite DJ’s and that I always have been one of his biggest cheerleaders. Nobody on the planet is happier to know that so many others are finally starting to see it, too,” Plaslaiko said.

DP: We met while you were DJ’ing experimental and ambient at EXAT at Zoot’s Coffee House in Detroit back in 1995. What made you decide to learn to DJ in the first place, and how did you teach yourself?

CS: I always say that I started DJ’ing to subsidize a pernicious record buying habit, but I did resist doing it for a while even after getting sucked into the Techno vortex. It’s crazy for me to think of a time now when I didn’t want to DJ, because I was constantly making mix tapes of stuff I heard on the radio and records I bought which is the same thing really. The only difference was that I learned how to beat match…sort of! I bought a used Technics 1200 to finally upgrade from the Fisher Price record player I had, adopted my dad’s belt drive Technics, bought a cheap mixer and set up in my parent’s living room and practiced beat-matched mixes for hours on end. I was always musical but didn’t have the discipline to learn to read music or play an instrument, but playing myself records is just fun and the rhythmic aspect of beat matching came easily. The formative moment was probably a DJ friend I looked up to (Sho) telling me how DJ’ing was just a really interesting and fun way to listen to music. And for the record, Derek, we first met the VERY first time at a Mercury Rev meet and greet at Play It Again Records. We talked about Autechre ‘Amber.’

DP: Continuing from the first question, did you have a passion to play dance music in front of dancing crowds even before then? And did you ever think you would still be doing it to this day?

CS: Starting out, I was happiest when I was in the audience for a great DJ. My passion for Dj’ing grew out of a musical dissatisfaction in those years when all of the sudden everyone was a DJ. I guess I just had that same artistic impulse of looking around at the landscape of art around you and saying “Ugh…no, no, no, it’s LIKE THIS!” Listening to and sharing music is something I enjoy doing as much as anything in life, I don’t imagine that ever changing.

DP: It seems like No Way Back during Movement 2013 was a “tipping point” for you, so-to-speak. People were finally realizing what many of us have known for quite some time: you are a complete badass. I know you’ve never been one to be quite comfortable with compliments, but how are you taking to this recently heightened attention? Is it all happening as naturally as you would like it, or do you feel more “pressure to perform” these days?

CS: Thank you Derek :-/ What can I say? I LOVE the attention! It’s all super flattering, and it does raise the stakes, as does the current culture of promoters recording and releasing all of my sets. I’ve always felt a lot of (mostly self-imposed) performance anxiety. But now that I finally have my turntables and all of my records back, I can practice at home instead of at the show! Also, now that I’m starting to collect and play music digitally too, I’m excited for the first time in a while to engage with new music.

DP: Sometimes you have a tendency to play records that on the surface may sound extremely abrasive when played by themselves. Yet, when you put them together for one of your sets, often you have a way of making them come off deep and sublime. Is this something you do intentionally? Or, like usual, am I just reading too much into it?

CS: Thanks Derek, that’s super flattering! I always feel a little cheesy talking about it, but when it’s all really working, the experience really can be transcendent. I love all of the records I play, and I’m just trying to show people what I really like about them, even if it’s something they wouldn’t listen to on their own. And I hope I’ve developed a taste level over the years high enough that what I play comes off as ‘deep,’ even when it isn’t pretty. Of course I ALWAYS want the ‘sublime’ part, but getting there mostly means cooperating with a great promoter that understands how to cultivate an atmosphere conducive to magic-making and then, of course, having good old friends like you in the audience to egg the whole thing on. It’s a joint effort to create that magic space where we can get really freaky.

DP: A little birdie told me that you had a studio session back in December. Were you happy with the results? Is it something you have been pursuing since/before and would like to do more of?

CS: Yeah, it was fun and I intend to do more of it. Nothing has been release-worthy yet and I refuse to put out mediocre junk just because the Techno Police say that I should have a release out by now. The collaborative aspect of it is what interests me the most. Plus, I really need to work with people who are more experienced in the studio than I am to help translate the ideas stuck in my head. Luckily, I’ve got several talented friends that want to collaborate.

DP: One of the things I have always admired most about your DJ’ing is the ability to truly challenge the dance floor in front of you. And we both know your love for music extends well beyond electronic music alone. Do you feel like you have any musical limits when you are in front of a crowd?

CS: I self-impose all sorts of constraints, mostly about picking music to match the setting. I still play well ‘inside the box’ most of the time. And I don’t often dip into neighboring genres, though when I do, it’s a huge thrill and very inspiring to me but I don’t feel that it’s appropriate every single time I play. And even though I maybe got a reputation for playing some abrasive stuff, there are still a bunch of records I love that I still wouldn’t dare play to a dance floor. Maybe now I’ll have to 😉

DP: It seems like the jump from Detroit to San Francisco has been great for you! What have you enjoyed most about the transition? And if you could go back in time and make the move happen sooner, would you?

CS: I’ve most enjoyed the cliché parts of being in San Francisco: the saturation of gay people and my subsequent forgetting of being gay and then the weather! While the queer immersion here has been great for me, I miss my Detroit/Ann Arbor friends like crazy and of course the parties that just are rarely as good anywhere else, but I have no regrets at all about the timing of my move.

DP: Much like myself, you have been displaced from most of your record collection for quite some time. I hear you are about to get it all sent to San Fran! That *has* to feel good! Can you name 3-5 records that you might have tried locating in your collection on visits home, but haven’t had much luck in doing so?

CS: Yup, they’re all here finally! And my turntables!! I will finally be able to mix at home again!!! A few records I’m excited to have been reunited with are:
The good early Rephlex records (Universal Indicators and Caustic Windows, etc.)
The Kreisel 7”s
My Stereolab & Flying Saucer Attack records
The impossibly weird Irdial records that I’ll never play out but still love to listen to all my drone records that just go “UUUNNNNNNNNNNNNNHHHHHHHHH.”

DP: Let’s talk cheese! Most people are aware of your passion for cheese. I realize this is a dumb question, but… gun to your head…. do you choose a well paid career in cheese, or DJ’ing? I ask because it seems you do pretty well in balancing both. I’m mostly curious about hearing you compare which one is more fulfilling to you and why.

CS: I don’t think it’s a dumb question at all! I decided to work in the food biz because I felt like I was too fringe to cut it as a full-time DJ, and that it would lose some of its magic for me if I did it more than once in a while. I go through phases as it is now of feeling bored, boring and irrelevant, I feel it would be disrespectful to go ahead with the gig anyways and play with that kind of ennui in my heart. When I don’t feel like playing, I just don’t and that’s the way I like it.

DP: And finally, paint us a picture: ideally, what does the life of Carlos Souffront look like 10 years from now?

CS: Hopefully it will look mostly the same, just with more grey hair! I expect to continue finding old and new music that inspires me to share it with friends, and I expect there to be that rare and special space where that can occur and I have a feeling that many of the familiar folks will be there too.