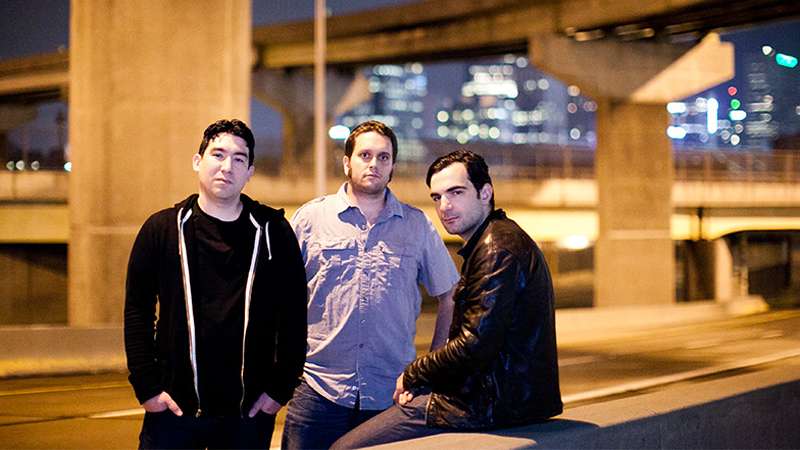 Something’s in the water in Pittsburgh these days. We’re sure you’ve been hearing about it also. Via. Hot Mass. Humanaut. Shawn Rudiman. Honcho.

Not since the rave days of the late 90s have you been hearing so much about underground dance music coming from Pittsburgh, Pennsylvania.

Leading the storm on the global stage with their critically acclaimed releases and live performances is the trio Pittsburgh Track Authority (P.T.A).

Preslav Lefterov, Thomas Cox and Adam Ratana have all been at it for a decade plus on their own, respectively, but together PTA has only been at it since 2011, culminating with their critically acclaimed debut full-length album, Enter the Machine Age, this year.

PTA’s initial performances were live sets. However, as their production and live performances have become more intrinsic, most bookings are DJ sets.

In preparation for the night, AYLI friends Secret Studio (Bai-ee and Tyrel Williams) sent PTA a few questions and the PTA shared with us an exclusive podcast to give us all a taste of their varied influences.

Take a moment to take it all in. You’re all in for a treat. Quality.

Secret Studio: In your live set at the Bunker there’s a lot of great percussion going on. Who’s getting down on the congas, timbales, cowbell, whistle?

Pittsburgh Track Authority: That is our friend / percussionist Cottrell. He uses a full percussion setup that is quite difficult to transport. When we did the Bunker show we filled an entire Jeep Grand Cherokee with the seats dropped. Needless to say it’s a bit unwieldy to travel with that setup, especially if you can’t drive.

SS: Tell us a bit more about your live set. What gear are you bringing, who generally does what? Is there specific material that you plan to cover?

PTA: It’s been about two years since we did live shows and we’ve reworked our live set significantly. When we first started PTA we were only doing live sets—not deejaying as PTA. So we were playing most of our material live and basically rearranging the songs live for the performance. The direction we’ve focused on now is a more stripped down and skeletal set with more improvisation. It goes with the vibe of the new material we’re working on and new studio equipment we’ve acquired in the past few years. We don’t really have strictly defined roles during the live set, but rather rely heavily on communication during the set. Each of us is capable of doing a live set on our own, so that makes it interesting.

SS: “In the Machine Age” is a recording studio you all run out of Pittsburgh, and “Love What You Feel”, “Machine Age Records” and “Pittsburgh Tracks” are all labels you manage (sounds like a full time gig). In addition to running those labels (and the studio), do you have careers outside of music? If so, has that allowed for or hindered your growth concerning “In the Machine Age” and PTA in general?

PTA: Only Adam has a career outside of music. The benefit of having three people is that Tom and Preslav work in the studio and on the labels full time, so one person having obligations outside of music doesn’t hinder us as much as if it was a solo act. There is no substitution for having at least one person be full time with music. It’s because we have that luxury, that we’ve been able to run the labels, the studio, and do PTA gigs. We’re even expanding the amount of records we’re producing and releasing on our labels currently and trying to work with more local artists.

SS: The PTA sound is pretty diverse, acid, techno, disco, “House.” As independent artists running multiple labels/pressing your own records, do you have a strategy behind the sub-genres you include on each release to help influence sales? Do you find that any one sub-genre sells better vs. another on vinyl?

PTA: Truthfully, the variety of music we work on wasn’t influenced by what will sell the most. In fact, in short term it maybe works against maximizing the number of copies sold on any individual record. However, that’s just a reflection of our personal tastes. We listen to—and DJ—a wide variety of music, so when it comes to writing we have a lot of influences to draw from. We also like releasing records that give the buyer a value, so we try to put them together with that thought in mind. Some of the most popular records we’ve had we’re ones we gave away online first.

SS: Its great to see you have so much success when going about your business with a DIY attitude. What are some of your individual strengths and weaknesses when it comes to the nuts and bolts of producing, but then also distributing and promoting your music?

PTA: We like to make sure we are all on the same page before moving forward with something, By the time people hear a track or see us promoting something, we have already discussed it and are able to move forward as a unit focused on the goal. Nobody has any ego about what’s happening, its always about making sure that we work as one to get the best results. This keeps everything very simple. As for weaknesses, we do tend to spend a little bit of time on the internet but this is also kind of a strength in some ways. Again it helps to have multiple people working because it allows you to divide the work and never get too distracted with one thing. We do think that the business and artist side of music are inseparable and we truly enjoy both.

SS: Djing together gives Tyrel and I a lot of ideas and motivation in the studio, because of that our preference right now is to DJ together vs perform live. When gigging as PTA, is your general preference to Dj or perform live? What is most fun for you and where do you draw inspiration from when you are in the studio?

PTA: We believe that the live sets are an essential component to what we do. There is greater time commitment they require and the final result is always less flexible, due to the limitation of only playing your own output. So, for example, currently we tend to DJ 4-5 times a month, often in different cities. That would be very difficult to do logistically and financially with live sets only. Live and DJ sets are fun in different ways for us: with a live set you get a sense of accomplishment from the fact you are performing only your own music; DJ sets let you control the vibe in a room like nothing else. Inspiration for us comes from the obvious places: our Hot Mass monthly residency, listening to new current music, our record collections, our travels, our families, Pittsburgh, and of course good food (most PTA decisions are made over lunch).

SS: As promoter/djs running the Hot Mass night, what would be your “pie in the sky” back to back set / booking? Two DJ’s, living… trading ones back to back for hours… Go!?

PTA: With the help of our friend and new Pittsburgh resident Tomas Ceddia (of Electric Pickle fame) we are bringing Theo Parrish to Hot Mass on October 18th. Would have been cool to bring Jeff Mills at the same night, but we’re working on that.

SS: Also, “Hott Mass,” What a great name for a party, makes me want to get to church! Is there a story behind that at all, how did you come up with it?

PTA: You should ask Aaron Clark about that one. We’re a recent addition to the resident roster, even though we deejayed there from the start, and weren’t involved with the name choice. It is a very fitting name and if you’ve ever been to Hot Mass you’ll agree that it’s certainly a spiritual experience.

SS: PTA all have roots in D&B, with that background, having included the kind of diversity you did on Enter the Machine Age, can I ask where all the Drum & Bass is at? Might we be in for a surprise during the live set?

PTA: It’s unlikely. We were never fans of how DnB translated to live sets and our biggest influences and friends in DnB are DJs. We do occasionally still play DnB DJ sets (we still own many thousands of records amongst the three of us). Actually this week we’re playing a set at our friend Erin’s Obvious party in Pittsburgh with Chicago’s DJ Clent. Our European agent is also a DnB guy…what’s up Nick Reddick!

SS: To close, thanks for taking the time to answer these questions, and coming out to The Bay for what is going to be a great show in Oakland! One last question… where or what (if anything), are you be
most excited about eating when you get out here? Lets do it…

PTA: As many of the friends we’ve made while traveling will testify: PTA like to eat. So we’re open to suggestions and happy to try anything: from street food to that gourmet level, we’re with it.