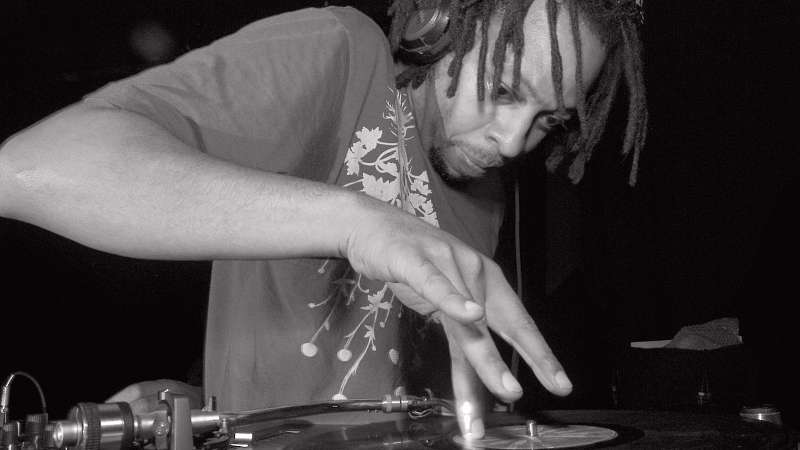 I’ve seen you a number of times in Ohio, when I was just getting into dance music and throughout my 7 or so years in Cincinnati. You, along with many others, were a huge influence to me, and for me personally, it’s great to have you out to AYLI in San Francisco.

As I understand it, you met Todd Sines in Columbus, OH at a record store. How did this meeting Todd spur your early work with Charles Noel and Mike Szewczyk as Body Release?

Titonton Duvante: Well as the story goes, we were both reaching for the same 808 State record. Being in Columbus, OH was like being a bubble. You had to really search to find these sounds. So at this time it was rather unusual to meet another person into the music. Todd and Mike had a project already going and invited me over to jam with my gear. We hit it off right away. We would record our jams sessions and go from there.We had quite a few mutual influences LFO ( rip Mark Bell), 808 State. Meat Beat Manifesto, and the early UK Hardcore tunes. We met in 1991. Teenagers at the time.

Mossmoss: You’re one of the most fun dj’s to watch, and that jackin’ style seems to me to be a very Midwest thing. How did being there influence you personally and musically, and has your recent move to NY changed you in any significant way artistically?

Titonton: The Midwest style is all about expression and creativity. There are so many technically skilled DJs in the area, That being said, one has to step up to the plate. Most influential was traveling the short distant to Detroit. Seeing Jeff Mills, Claude Young, Heckle & Jeckle aka Paris & Billebob & Derrick May on a regular basis. There were Chicago trips as well. Mainly Paul Johnson & Derrick Carter there. Honestly, being in NY only made me realize how special the Midwest scene is.

Mossmoss: Technology has changed greatly over the years, no less in reference to dance music production. Has this change affected the way in which you make music? If so how has your workflow adapted to meet the technology?

Titonton: Absolutely. The funny thing is I always feel behind on technology. I was 100% hardware until I started hanging out with John Tejada on the regular. This was in 2000. I sold all of my gear and got a laptop in 2002. Software based production has been a blessing and curse. The minutia. You can spend hours getting everything just right. So I now I have the option to make something sound intentionally gritty or as if it is about to unravel. It is tough at times to get let something go.

Mossmoss: What piece of gear/instrument, digital or otherwise, is impossible for you to live without?

Titonton: Before it was the Roland Sh101 and Roland Juno 106. I am VERY comfortable with pieces of gear. The sound architecture is not too terribly complex and the instruments are rather expressive. However, I felt a belt limited by utilizing these tools on every track. Now I am all about my DAW. But (late again) going back to a more integrated hardware/software set up that tactile flavor is missing.

Mossmoss: How do you feel websites like Beatport and Juno have affected the way in which music is consumed and promoted?

Titonton: So tough to keep up. There is so much coming out on a weekly basis. Personally, I find it tough at times to digitally dig. Unfortunately this deluge gives a sense of disposability. Making it difficult to hear and get heard. There is some amazing work coming out lately and without the proper avenues for exposure it may not meet the ears of those that would enjoy.

Mossmoss: Your music has pulled from many sources, jazz, D&B, techno, and house and I’ve read that you are working on a new album. Tell us a little bit about the recording process and what we can expect to hear in the future from you?

Titonton: Indeed, working on a new album. All of the tunes will have acoustic instruments and the majority will have vocals as well (some of the singing by yours truly) So the process is I will write the basis for the tune at the computer. Then do the string arrangements. Next write the lyrics. Once all of the tracks are composed and arranged-We (violin, viola, cello, guitar, bass, drums and vocalists amongst others) will go in the studio and lay down the parts. Stylistically the music for the album will vary greatly. Dilla influenced hip hop to Depeche Mode influenced synth pop. There is even a piece that I played for some friends in Paris and they said Derrick May goes to Brazil. Hoping to finish writing a total 13 tracks for the album this winter. I have 8/9 written and arranged already. I’ll pick the best 9 of the 13 after they have all been recorded. There are other projects in the works as well. An EP for Dan Curtin’s Metamorphic label. A track with Christopher Rau on Derivé. An ep for Sassmouth’s God Particle label. Tracks and an EP for Residual and a handful of remixes.

Mossmoss: You have quite a history with some amazing artists, working with Morgan Geist and Fabrice Lig, releasing music on your own label Residual Recordings from Boo Williams, Fabrice and John Tejada amongst your own. I’d love to know who you’re looking to now days for fresh sounds, who’s on your radar?

Titonton: There are some ridiculously talent producers out there now. Two of which I am fortunate to have tunes for the relaunch of Residual in 2015. Those being Frits Wentink and Christopher Rau. Seriously two of my top right now. I am always checking tunes from Max Graef, Lone, Borrowed Identity, SA3, Glenn Astro, Michael Dykehouse, Lay Far, Brian Harden, Moon B, Harvey Sutherland, Leon Vynehall, Aybee & anything Dego has a hand in. Damn this could be a very very long list.

Mossmoss: I’ve had a special place in my heart for ambient and low-tempo music these days especially when it comes to listening at home, what do you listen to when its time to unwind?

Mossmoss: Where has been your favorite place to dj/play live as far as crowd interaction and all around fun vibes?

Titonton: In recent times. Golden Pudel in Hamburg, Germany, Hands down top vibe of any gigs during my European tours. It is small venue with a punk attitude. A very knowledgeable and up for it crowd.

Mossmoss: Thanks for coming to San Francisco, can’t wait to see you out with us! Just one more question for you; what’s the best spot to grab the best bite in NYC?

Titonton: Well depends what you are into for Thai it is a tie (pun intended) between Klong & SriPraPhai, Hot Kitchen is great for Szechuan., Pauli Gees or Roberta”s for Pizza, Tiffin Wallah for Indian, Shinobi for Ramen, Ariyoshi for Japanese…Okay I think that is enough.