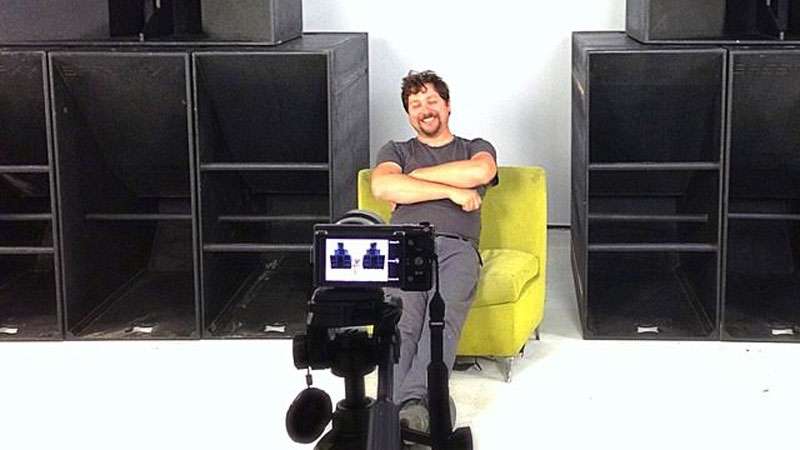 We’re excited to welcome back As You Like It friend and Los Angeles luminary Joe Bickle back to San Francisco. Since we last hosted Bickle, he’s been busy building his Animal Club parties and his True Chord Sound System. While both his parties and his sound system are staples of the Los Angeles underground, we’re looking forward to his contributions behind the decks. His sound can cover the spectrum of house, disco, techno and gray area in between. Take a moment to read AYLI resident Mike Gushansky’s interview of Bickle as you listen to his podcast in preparation for As You Like It with The Black Madonna July 3, 2015. Quality.

Mike Gushansky: Just last year I moved home to Los Angeles from Oakland. One of my first nights out after the move, my friend Sam Allman took me to your warehouse for the first time to go see Jason Kendig. Your space left an impression on me; indoors and outdoors, not oppressively small but not too spacious either, its own custom sound system. Tell me a little bit about the development of your space.

Joe Bickle: Well…lol. That space has been sucked into the depths of the underground rave vortex of spaces. The owner knew about the parties and our lease was up, so no more Bad/Good warehouse. We got our use out of her though, she did 2 solid years of utility rave use and also helped me build and promote TrueChord.

MG: Sound quality and types of sound systems used can really define an audience’s experience. Custom sound systems can grow to define an event or a crew’s sound in much the same way as their music, their crowd or their attitude. Part of Sunset Sound System’s identity is the full Opus Sound Setup they install at Stafford Lake. Part of Dirtybird’s meteoric rise was in part due to how their sound system enabled them to grow in front of a larger audience on their own terms. Why did you put together your system, what pieces were created originally, and what have you added over time? What informs the “Truechord Sound System” moniker?

JB: I agree with you, and that is why I decided to take the long road of learning different components and what “color of sound” each piece of gear or room has. I’ve also worked in more corporate high budget environments where I had the chance to sample a lot of expensive, elaborate gear. But actually, I’ve been turned on by sound since I was a boy and even made multiple bass boxes for car audio before I even had a car. After throwing a few warehouse shows in 2003ish I decided I wanted my own rig. Over time, I just kept trading out gear with better gear. The pieces that are custom/original are mainly my dual 15″ mid bass, and I also have some smaller 18″ for small shows. We’re working on a 21″ right now as well which I’m really excited to showcase. I have a few different tops but my favorites right now are the TurboSound TA500 Aspect 3 way tops. They use a very rare polyhorn that gives really good imaging and pattern control. You don’t need them to be loud because of the pattern doesn’t break apart over distance as much. The “TrueChord” moniker just simply comes from wanting multitimbral definition and range with our setups. I like the word Chord. It makes me feel all warm and tingly.

MG: Your sound system is used in the underground all over the city, for countless promoters and in a number of different spaces. I think there is something really interesting about how your sound system inadvertently connects people to each other that might not otherwise be connected. The sound helps to develop a sort of sonic texture to nightlife because a scene is listening to so various artists and DJs hosted by several different promoters on the same system. Was there any intention on your part to become so involved or did it just happen over time? What if anything was your inspiration to put so much of your personal time into participating and facilitating the people around you?

JB: There is definitely intention there. I believe in service if you care about something. I’ve helped a lot of promoters from everything from finding venues, to coaching them on how to deal with all kinds of fun stuff in the underground. I think when artist get certain things out of the way they can actually get to the art and raise the bar. Nobody really did that for me so pendulum has swung.

MG: Mixing and putting on events have become equally fulfilling passions of mine over the last 8 years. At certain junctures I spend more time mixing and at others I dedicate more of my energy into creating events and spaces for other DJs to play. How did you come to mixing? Were you always participating as a DJ and a promoter or were those two aspects of your involvement mutually exclusive? What is your preferred medium when mixing out and why? What do you always bring with you in your bag when you perform?

JB: Mixing, well me and mixing have kind of a odd relationship. I started out strictly on 1200s and started buying “mixing records” at about 21 years old. At the time the go to spots for me were Wax (Hollywood), Noise Noise Noise (OC), Higher Source (OC), Siesta (SD), Primal (SF), Tweakin (SF) In House (SF) and Milk (PGH). I had 2 friends both with different styles and they would just boo me for about 2 years. It was still a few years before CD’s started coming around. I also went through the “you shouldn’t play CD’s if you play techno” but “it’s ok to play CD’s if you play house” but “techno it’s ok to use computers, but you shouldn’t be playing techno if you play house” then back to the “you can’t play disco at a techno party even if it’s vinyl” and finally on to the “if you can afford a car payment you might be a vinyl DJ” hehehe. I play both vinyl and USB now, I find that USB allows be to jab tracks off when I really want and sometimes I just want to play the intro beats of disco song that has bad vocal. And yes of course vinyl, yeah I play it. I’m not going hang my MO on it though or any median for that matter, I’m looking for music not things. I do still love playing & pulling vinyl though I’d say it’s almost a luxury these days, and who doesn’t like to live in luxury.

MG: Being involved to the extent that you are in Los Angeles, are there any projects, artists or events that are particularly exciting to you right now? What are you currently working on in the coming months?

I’m out almost every weekend and it just keeps moving. I have to admit though, I don’t really get excited for any particular DJ’s anymore. I get stoked when I see a show that I know will have all the right variables for people to get comfortable and modulate, not just a DJ showcase. We have a new series of shows called “Modern Affirmations” which is a slightly new focus and with a new partner Justin Ream. We’re working on a video production company together under the same name as well. My little vinyl label “Mallory’s” is due for another release soon also. Truechord has been taking up a lot of my time, I’m always juggling, all the time.

I have not been to Vinyl Dreams. I’ll definitely try to stop in. I’m just stoked to go to the Bay and see some friends and eat some good food. I’m really looking forward to getting into something fun Saturday/Sunday too 🙂