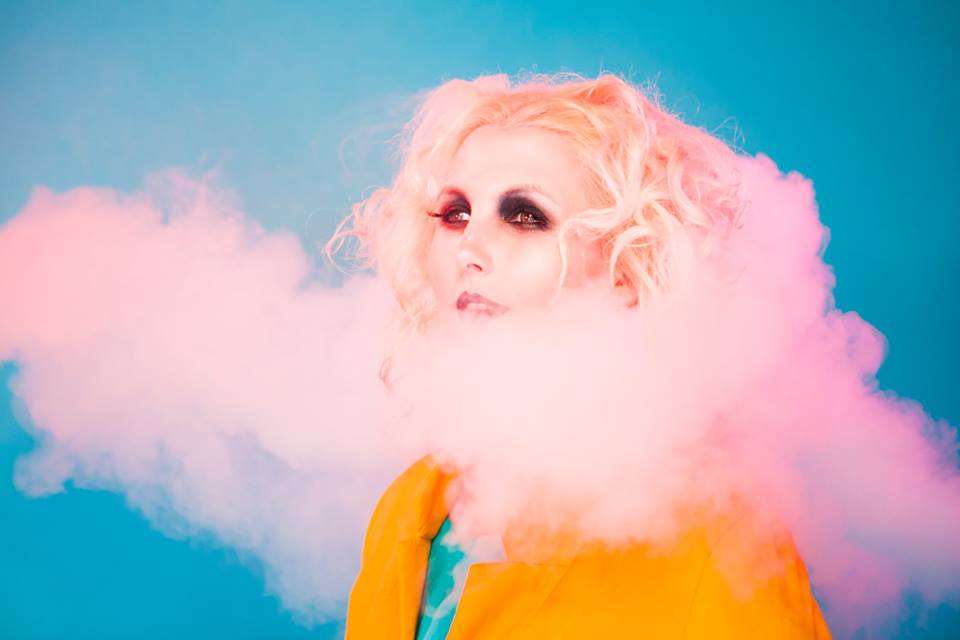 We’re excited to welcome back San Francisco artist Chelsea Faith AKA Cherushii to perform live in support of Objekt and Call Super, Friday, June 24, 2016 at The Midway. Faith’s been on our radar for over a decade now, since her first introduction to Bay Area late-nite dance culture in 2000, to her evolution of an artist and performer in the mid-00s. In preparation for her AYLI return, we’re honored to release the recording from her debut AYLI night as an exclusive podcast, alongside an interview of Faith by As You Like It’s Social Media Coordinator William Wardlaw. Take a moment and dig in. Quality.

William Wardlaw: You produced some earlier music as C.Faith. What inspired the name change to Cherushii?

Cherushii: Cherushii was a name I used in my teens, when my music was on homemade cassette tapes I passed out to my friends. I switched back to Cherushii when I released my first 12″, because I found C. Faith to be a little sterile.

WW: I watched your Live Acid Jam from your studio and recognized a few pieces of equipment like the Yamaha RS7000 sequencer and an Access Virus. Has your live gear changed greatly over the years, or have you kept it mostly consistent?

Cherushii: My studio and live setup have gradually evolved over the years. When I find something that works for me, I tend to stick with it. I don’t buy and sell gear as a hobby, so I really only update or replace things as needed. The RS7000 was my first sequencer, and still one I love to use. It was the heart of my studio and live setup for a good 11 or 12 years, before I switched to the more compact and powerful Octatrack for performing. I still use the RS heavily in the studio though, it’s incredibly useful and intuitive. None of the gear I use for performing today was in my live setup the first time I played out, but the format is similar: A primary sequencer/sampler, a monosynth, a multitimbral synth, a drum machine, and an effects unit. This format works well for me.

WW: Is there one new piece of music equipment that you have your eye on or that you’d love to own if price wasn’t a factor?

Cherushii: I know this isn’t what I’m supposed to say, as a person known for performing with hardware, but I’m actually quite happy with what I have. I have a handful of really great synths, two amazing Elektron boxes (Octatrack & Machinedrum), my trusty RS, a x0xb0x, the very versatile and powerful Virus TI, and a few other assorted pieces of gear. Of course there are always things I would love to upgrade- a faster computer, nicer microphones, better soundproofing for my studio. But overall I feel very content with my assortment of machines. I’m not much of a gear fetishist, believe it or not.

WW: You primarily release your music with 100% Silk Records. How did that connection begin and why is it such a good fit for your sound?

Cherushii: I found my way to 100% Silk through Andre Ferreira, who is a friend I knew from the club scene in San Francisco. I had sent a few tracks out to music friends and colleagues just for feedback, and he was someone who actually listened and gave some good constructive criticism. This was in 2012, around the time he put out his first record for 100% Silk as Bobby Browser. He passed my tracks on to Amanda and Britt Brown, who run Silk, and they asked me to do a 12″ on the spot. I was completely surprised! Something I love about 100% Silk is that they are not afraid champion unknown artists. They release music they believe in, without being concerned with the artist’s marketability. Many so-called “tastemakers” are really just following what’s hot, working with artists or sounds that are already on the ascent. Amanda and Britt don’t sign artists because of hype or reputation; they are totally willing to build an artist’s career from scratch. I wasn’t a hot name they wanted to get on their roster, I was just someone who made some tracks Amanda liked, and she released them.

WW: Your most recent EP ‘Far Away So Close’ had a 12″ vinyl release, while ‘Memory of Water’ was put out on cassette tape. How do you choose what format is right for a project?

Cherushii: For both of those releases, the format was chosen before I made the music. As soon as “Queen Of Cups” came out at the end of 2013, I started working on material for a new 12″ for 100% Silk. The record ended up taking a really long time to get pressed – it was about a year from the time I turned in the finished tracks, to the final release date. The record pressing bottleneck is a very frustrating reality of putting out vinyl. Britt suggested I do a cassette release in the meantime, while we were waiting for the record to get pressed, as tapes can be turned around much faster. I made “Memory Of Water” pretty quickly, over the course of a couple months, with the intention of doing a cassette album. That’s why it’s so stylistically different from my other work; I was not aiming to make music for DJs to play on a 12″. The choice of medium really guided my creative process.

WW: What was your inspiration to release three free EPs on your own bandcamp site with a “Name Your Price” option? Has it been helpful to have that platform as an independent artist?

Cherushii: Releasing my Bandcamp EPs was also a result of waiting for so long to get a record pressed. I had a whole collection of tracks that I was just sitting on, with no immediate release plans. I thought about shopping them around, trying to find other labels to work with, as I knew Silk couldn’t put any more 12″s on their already-full release schedule. But the process of getting a record pressed is very time consuming, and I wanted to get some things out sooner. Bandcamp has turned out to be a valuable resource, I love using it. It’s great to work within the infrastructure of a label – that support is so crucial – but it’s also nice to occasionally do releases on my own schedule.

WW: About a year ago your song ‘Wild Abandon’ was available for download via XLR8R, and on their Soundcloud page alone it was played over 18,000 times. Did your music receive noticeably more attention after their feature?

Cherushii: It did, but not immediately. The XLR8R feature brought the track to the attention of the BBC, and a few weeks later it was featured as the free download of the week on BBC 6. That was actually the thing that got me a little bump of attention. I suddenly got a glut of emails from people in the UK, it was really quite surprising.

WW: You throw the Run The Length Of Your Wildness party with Roche and recently moved to Underground SF from the old 222 Hyde space. What inspired the party and what range of sounds are you focused on highlighting?

Cherushii: Ben (Roche) and I started Run The Length Of Your Wildness because we were looking for a low-pressure environment to DJ with our friends and colleagues. Weekends are competitive and stressful, so we chose Monday because it is the absolute slowest night of the week. Ben and I both love dance music, as we’re both dance music producers, so that is a stylistic anchor for us, but not one we feel obligated to stick to firmly. The beauty of a low-key Monday night party is that there is no pressure to entertain a big crowd of partiers who are looking for that weekend release. We can experiment, take more risks, and try out tracks that we might not as readily pull out at a packed club on a Friday night. Ben has a cool collection of beats from his past life as a hip hop guy, as well as some weird avant-funk, super heady techno, left-field disco, and all kinds of psychedelic dance floor tunes. I tend to get a little self-indulgent on Mondays and play a lot of stuff that is purely for my own pleasure – lots of Italo, breakbeat rave jams, electro, dubby techno, the occasional slice of vocal house cheese. I really spill my guts musically, all the guilty pleasures come out. We never tell our guests what to play- the idea is to let them stretch out and go wherever they feel. We’ve had guests play sprawling ambient and post-rock sets, but then we sometimes have DJs who play straight-up club music. When you look back at music history, you often see that new musical movements come out of eclectic scenes. New developments can’t possibly arise from events that are focused on one genre; there’s no room for growth there. This is something that pushed me towards multi-genre events and DJing a lot more, like with Wildness. And it’s just a lot more fun! Being a genre purist is so boring.

WW: You have a radio show on Berkeley’s campus station KALX. How does the music you play in a DJ set differ from what you play on the radio?

Cherushii: DJing on KALX is completely different from DJing in a club. For one thing, you’re totally isolated, alone in a room by yourself. It’s a much more contemplative, solitary activity. KALX’s mixing desk is not really conducive to club-style DJ mixing; there’s no crossfader, no EQ, no monitoring with headphones. Beat matching records can be a little dicey, but I do it for at least a portion of my show every time. Also, KALX has an official policy that all DJs are required to play at least three distinct genres of music per show. I have to go out of my way to include a variety of styles, but still make it cohesive somehow. This is generally my chance to pull out music I don’t even play on Mondays – ambient, pop music, shoegaze, dub, 80s slow jams, experimental synth weirdness, gamelan music, whatever. I do like to highlight dance music on the air though, especially work from local artists. A few Bay Area producers who I have played a lot on my show are Roche, Nackt, Russell Butler, Lavender, Loren Steele, Michael Claus, Caltrop, and David Last.

WW: You have some of my favorite artist portraits I’ve seen, taken by Jeremy Danger collaborating with Lulu Danger on makeup and hair. Do you bring visual ideas to them, is it a collaboration, or do you let their inspiration surprise you?

Cherushii: Thank you! Lulu and Jeremy are both amazing artists, and it’s just crazy luck that I get to work with such high caliber people. Lulu is a makeup artist and fashion designer based in LA, and has been one of my best friends since we were 14 years old. Jeremy and Lulu are a total power couple, and they create these incredible, fantastic images together. Jeremy knows exactly what he wants, he’s a totally visionary photographer, so he’ll just sit me down and tell me what we’re going to be doing that day. I trust them completely, so when we do a shoot, I just let them work their magic. The two of them continually surprise and amaze me.