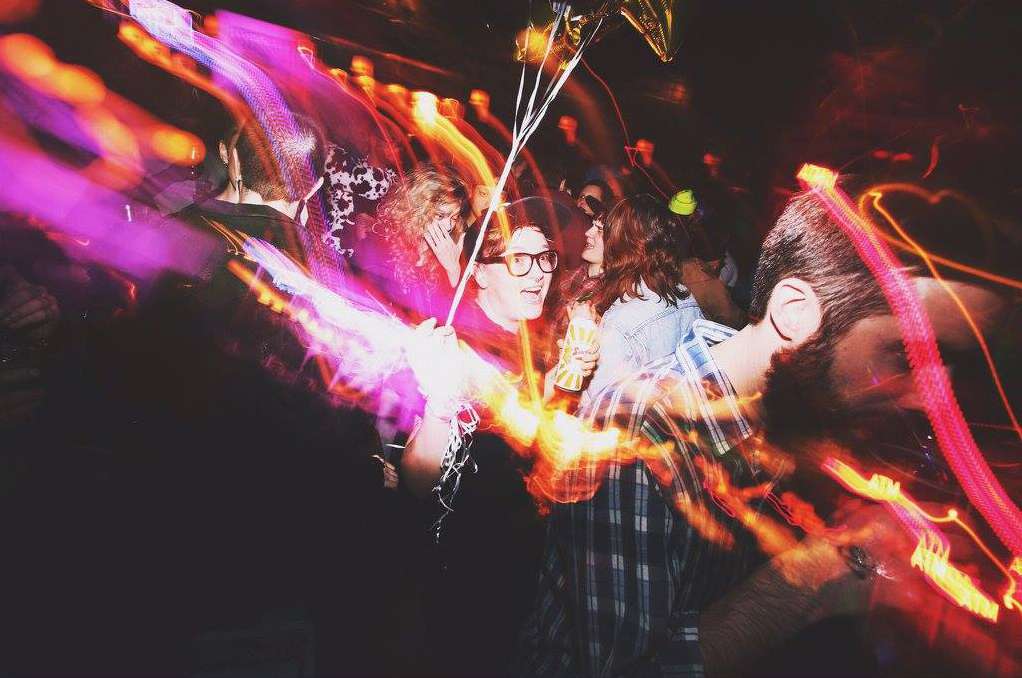 Portland’s Sappho, aka Megan Andricos, is no stranger to DJing. She isn’t quite a household name — yet — but that won’t remain the case for long. Her profile has risen steadily over the past several years, the result of her sharp, savvy DJ sets, focused on a “Cosmic and Electric” sound, as she indicates below.

Sappho is a disco DJ, but for her, disco is a place to begin, not an end in itself. She selects tracks that have all the funk, soul, and fervor that fine disco is known for, but extends outward from there, looping in psychedelic acid, vocal-heavy deep house, and occasionally some darker, weirder, EBM-styled tunes.

Her podcast for As You Like It, recorded live at an afterparty in Portland, showcases her range. It kicks off with sassy disco, but quickly moves into funky house cuts and Afro-Caribbean-inspired sounds before ending on a darker note.

You’ve been DJing for a long time — tell me how you got started. When did you know DJing was in your blood, and what were some of your early gigs like?

I started going to parties in 1991 and saw Deee-Lite at my first one. I was bitten and infected by the dance music bug at that point. The dance music scene throughout the United States, at that time, went hand-in-hand with marginalization. I spent most of the 90s going to raves in the Pacific Northwest. I began DJing in 1999, when I made the decision to go back to Western Washington University in Bellingham, WA and pursue my degree.

This choice to further my education led me to put the party lifestyle on hiatus, but I wanted to still experience new music, and the logical step was to become the person who sought out and mixed the music — so I didn’t have to travel to Vancouver, BC or Seattle, WA from Bellingham to party till the sun came up. I was self taught, so needless to say, there was a steep learning curve, and I definitely fully disclose I was a pretty poorly skilled disc jockey in the first few years. I did, and do, love recording shopping, however, and I feel that music selection has been something I’ve had a tight grasp of since day one.

My earliest gigs were in Bellingham, and in a small town called Mt. Vernon, WA. The parties in Mt. Vernon were quite interesting as they were — for lack of a better term — “pretty darn sketchy.” On January 1, 2003, I was invited to DJ with the Soundproof Crew out of Vancouver, B.C. That, I feel, was the turning point for me as a DJ. I had held their events in the highest esteem, and they really were the Hard Techno parties to be at, back then. I should note — I started off as a Hard Techno DJ and have, in my 17 years of DJing, traversed to curating a sound I call “Cosmic and Electric.”

Similarly, tell me about your recent past as a DJ. How have you grown over the years, and where are you at now?

I’ve been asked questions similar to this before, and have always felt pressure to answer through the lens of “what it means to be a female DJ and/or a queer DJ,” but really my DJing experiences boil down to one thing: MUSIC. The obvious answer is that I’ve been able to expand my musical knowledge. I have always loved music, and one of the great joys in my life is discovering new sounds and aural landscapes. It gets me excited in that “special” way.

As I mentioned, when I first began DJing I focused on Hard Techno. Truth be told, it was because I was able to navigate the Hard Techno section of the record stores in my area the easiest. I also focused on Electro, Minimal, and Microhouse for the first 8 years I DJed — and I still love all those genres. A pivotal defining point, musically, came when I heard LCD Soundsystem’s 45:33. I had never really heard “cosmic” disco before, and my mind was sufficiently blown. The breadth of music touched on in that “jogging” mix commissioned by Nike still blows my mind.

Now, I don’t really put a label genre on what I play out to the dancefloor. I like finding music I’ve never heard, never knew even existed, and then sharing it. The true point of DJing, in my opinion, is to curate and share music, and the ones that do it well keep people engaged. (Well, really the job of the DJ in a club setting is to make sure the party keeps going. Ha!) Also, I began with vinyl and over the years, have learned different mediums to DJ (CDJs and digital, mainly), but my true love is playing records.

Not even going to front — I’m really stoked and honored to not only DJ in Portland, where I reside, but have the opportunity to travel the West Coast to DJ. If you asked me even 6 years ago if travelling to spin records would be in my future, I would have laughed at you.

Although I haven’t spent a whole lot of time in the Pacific Northwest myself, I’m noticing that there is definitely a distinct scene and sound crystallizing there. Do you think there’s a distinct “PNW” sound? If so, what do you think it’s all about?

Believe it or not, it rains a lot up here, and we have some pretty grey skies. That definitely influences the “PNW” sound. We like it darker — I say that half in jest. I think one of the biggest influences in the Northwest right now is the influx of new people. The population in Portland alone has recently grown by nearly 58,000 people. Many people are coming with new ideas and new resources. People move from the Midwest, East Coast, South, Plains States, California, Southwest, and beyond, bringing their own experiences, histories, and add to the musical landscape of what’s been happening here in the Northwest. It’s enriched the tapestry.

Drilling down locally — tell me about Portland. Portland seems like it has a steadily building, steadily growing dance music scene. What’s it like?

I have a default answer when people ask me what Portland is like — I respond “it’s cute.”

But it’s so much more than that. I’ve been a Portland resident for 13 years, and have seen the scene grow and change, just like any organism. If there is a musical style for you, you’ll find some representation of it. If there’s a social group of people you would like to congregate with, you can find them here. To say the very least, Portland is thriving musically, but a major issue we face is lack of appropriate spaces for events. I personally feel quite fortunate that as a DJ, I have had the chance to mature because I never had to pigeonhole myself to one sound or scene, and was given the opportunity to experiment.

Tell me about your As You Like It mix. How’d you put it together? Is there a certain theme or sound that you wanted to showcase?

This mix was recorded live in Portland, on August 13th, at an afterhours event where I played the opening set. Considering that there were few people at the afterparty at 10pm, I decided to dig deep into my collection and play music that really reflects my passion for the obscure and unheard.

I know a few of the tracks, like “Whip of the Rhythm” by Chico Secci Project, and “I’m In Love” by Sha-Lor, are familiar to those who know their early house tracks; releases by Pete Herbert and Jokers Bizarre are recent, too, and part of the revival in EBM/Dark Disco happening lately. I also keep an ear towards music coming out of Africa and Asia. Their amazing musical lexicon, overlooked by much of the West, is astounding — and it really, really excites me that through the joy of the World Wide Web, our world has become a place where that music can be easily shared.

Speaking as someone who is gradually realizing that the world of disco is far deeper than I initially realized, tell me about disco — what does it mean to you and why does it excite you?

Remember, kids! Disco sucks because dancing is the work of the Devil. (I kid, I kid.)

The thing that sticks out most to me is — disco is the original club sound, the music of marginalized people in society. It’s a rhythm and beat that built on music such as R&B, Salsa, Afrobeat, Soul, and even Polka, to name but a few of its predecessors. What gets me most worked up about it is that it’s really hard to define — because of its extensive lineage, and because it’s a living and evolving genre. There’s always something new to listen to and discover.

Tell me about your practice as a DJ. How do you like to DJ, speaking technically? Do you have any tricks or techniques you find useful that you’d care to share?

As I mentioned, I started DJing a little over 17 years ago, in the sense that I had two turntables, a mixer, and was attempting to make two different records mix into one non-cacophonous sound. (I abhor cacophony, which made it quite the challenge not to give up teaching myself how to beat match for those first two years I attempted to be a DJ.)

One day, while playing Ghettotech records around 2001, a light went off in my head — I had the epiphany that I needed to treat each song like a puzzle piece, and the idea was to figure out how to make each jigsaw piece fit with each other. I absolutely love playing vinyl more than any other medium. It’s very expensive to specialize in, however, so I’ve adapted other DJ tools — CDJs and (other people’s) digital controllers, as needed.

What are some records that have really excited you recently?

I’m going with just dance LPs for this answer: The Green Door Allstars’ “Youth Stand Up!” on Autonomous Africa; Fatima Yamaha’s “Imaginary Lines” on Magnetron Music; and I’m really excited for the upcoming release by Moscoman, coming September 23, “A Shot in the Light” on ESP Institute. There’s so much great music out there!

What makes a really good DJ set, in your opinion, speaking as a partygoer?

My obvious answer: when the DJ takes the time to read and understand their crowd, and takes them on a journey. Specifically, having my musical brain challenged. I want to be dancing, sweating, smiling, and scratching my head, asking myself “what song is this?”

Finally, what do you like to listen to in your “off time” — when you’re not digging and selecting records for DJing?