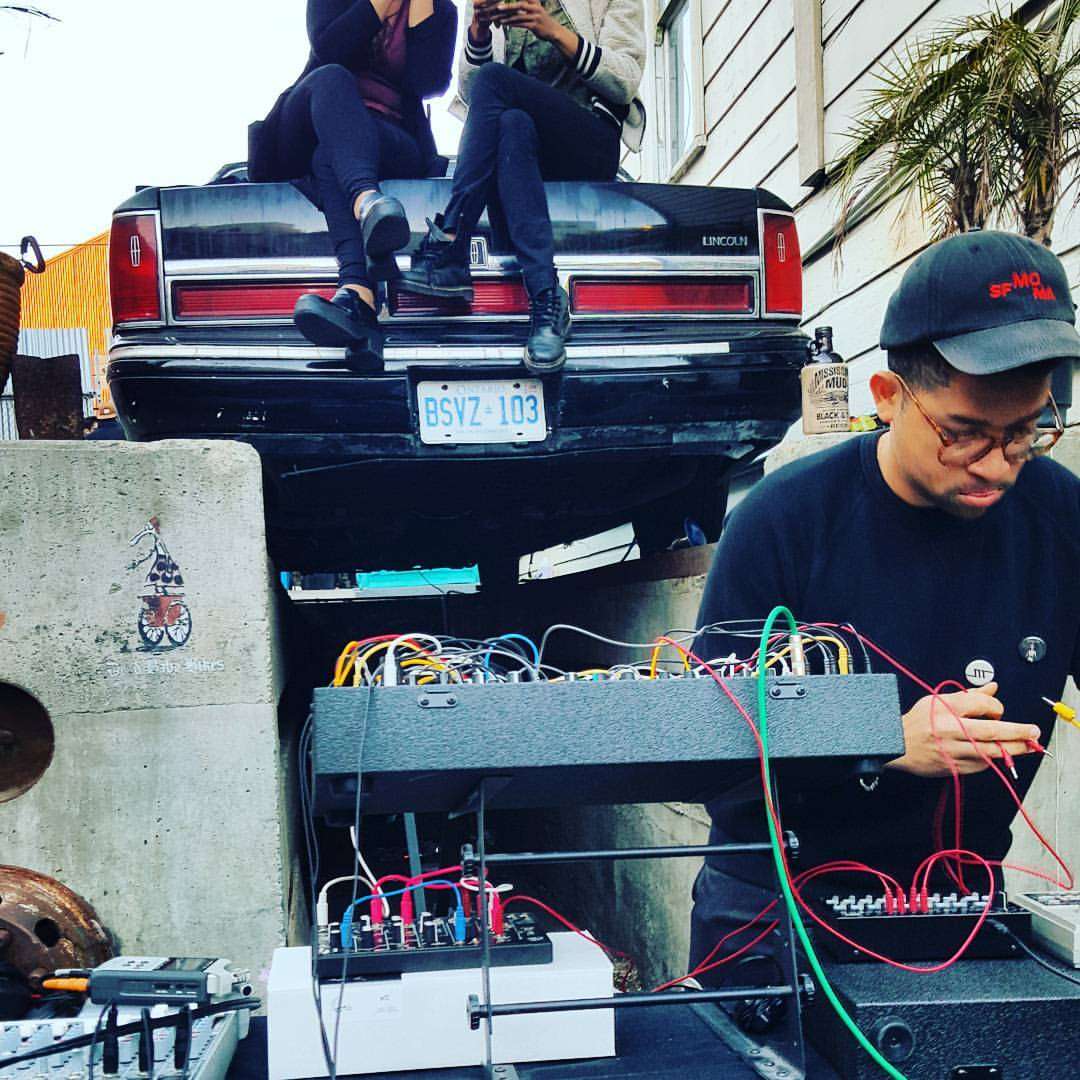 Russell E.L. Butler is one of the Bay Area’s finest. The Bermuda-born, Oakland-based producer has spent the last several years building up an unassailably fine catalogue of raw electronic music: first as Black Jeans, a short-lived minimal synth project that refreshingly did not trade in nostalgia, and recently under his own name, under which he releases stripped-down techno that carries potent emotional weight. The world is taking notice — his first album appeared on cult U.K. label Opal Tapes, and three EPs followed shortly thereafter, with more on the way this year. He’s just returned to the Bay after touring his live set all over the States and Canada.

Besides being a stellar live performer, Butler has been putting in work behind the decks — he’s developed his own unique voice as a DJ. This latest mix for As You Like It ebbs and flows its way from funky house to heavy, hard-hitting techno, broken up with an assortment of raw drum tracks whose stepped percussion patterns take notes from grime and club. It’s a dynamic, kinetic listen, seething with energy.

On Friday, April 21, Butler will be warming up the As You Like It dance-floor, opening for Umfang and Berlin legend Marcel Dettmann as they take over Public Works for part of AYLI’s nascent Unabridged series. We caught up with Butler to find out what makes him tick. Read on:

CZ: Tell me where you’re from and how it’s influenced you musically.

RB: I’m originally from Bermuda, a small island in the Atlantic Ocean. It has been some time, since I have lived in Bermuda and I have lived in the Bay Area long enough to call it home. However, Bermuda’s influence lingers. I return at least once a year to visit friends and family, but it is not financially possible for me to live and work there. It is the most expensive place to live in the world, literally, and much like San Francisco, that can have a crippling affect on marginalized classes like Black people, POC, queer folks, and artists. I feel incredibly privileged to live in a place that has provided me with opportunities to grow my creative career and I hope to bring what I have learned back to my home country, so that young Bermudians can also have a chance to influence and expand on Bermudian culture.

CZ: You’ve resided in the Bay Area for quite awhile now, performing all the while. In your estimation, how has Bay Area electronic music changed over the years, and what kind of place do you think it’s in right now?

RB: I think that as participants in the scene have gained experience through recording, practicing, playing live, and promoting events the scene has grown and gotten stronger. Despite the fact that it is so difficult to make ends meet in the Bay, there is still so much incredible art being created here. We really know how to strive in the place adversity here. I feel as though there is a major push to make this arts community more sustainable and recognized internationally. People really need challenging and innovative music, there is a lot of that here and the world is about to find out.

CZ: I’ve seen you go from performing minimal wave as Black Jeans in scuzzy basements with subpar sound to touring your new live set all over North America and now warming up for Marcel Dettmann. Without jinxing, it seems like things are falling into place. Did you ever imagine things would have worked out this way back when you were first getting started?

RB: Not really. When I started Black Jeans, I didn’t think I was into techno at all. I listened to some stuff that I would now identify as techno (early AFX, Pan Sonic [RIP Mika]), but for the most part I thought it was vacuous music for mindless escapists. Now I know that it is much more than that.

CZ: On that note, how do you feel you’ve grown as an electronic musician over the years? In my opinion, you’ve grown into your own unique, idiosyncratic sound, but I’d love to hear what you yourself think has changed and developed.

RB: I have always tried to sound like myself, which I feel is one of the hardest things to do as an artist. My confidence in who I am has grown as I’ve gotten older and that allows me the freedom to just be myself no matter what tools I am using. This confidence has gotten me to a place where I really know what my voice sounds like and I now know how to wield it.

CZ: When did you start DJing? Have you always been interested in DJing? Is there anything about DJing that appeals to you in a way that live performance doesn’t (or simply lacks)?

RB: I have DJ’d on and off since I was 18, but I started taking it seriously 2012. I needed a way to continue to play locally while I had time to record and develop new lives performances. DJing is so fun for me and feels so natural that I eventually became obsessed with it and have been able to develop my own style. Performing live and DJing are processes that influence each other now. DJing helped me better structure my tracks and performances so that they would be ready for a dance floor, while live performances have helped me take more risks and try new things in my DJ sets. I don’t think of them as having pros and cons, they are different experiences that have considerable overlap. Most of the out of town bookings I have had this year have allowed me to play live at one gig or point in the evening and DJ at another. They serve a dual purpose one personal ie. I just love playing and one practical ie. I want to elevate my profile as a DJ so that I can tour doing both.

CZ: Tell me about your AYLI podcast. How’d you put it together? Is there a story you’re trying to tell?

RB: I recorded this podcast at Umfang’s apartment while I had some down time in NYC. I was bored and snowed in and she had CDJs and a mixer at her place so I initially was just practicing and decided to hit record on my Zoom. It just happened to turn into a mix that I was really happy with after one take. When I DJ I try to play tracks that give context for my work and the community that I am a part of, while also rooting them in the history of dance music. The mix features tracks new and old, available and unreleased by establish and emerging artists. I am not a genre-specific DJ, I instead focus on weaving a narrative between elements that were at one point disparate.

CZ: In your opinion, what separates a great DJ set from a merely OK one?

RB: There are so many elements involved in this. I have seen great DJ sets where the DJ did not connect with the audience so the energy was low and I have seen sets that were not technically skilled, but the vibe was right and the audience was tuned in. I think there needs to be a balance between appropriate tracks, venue, party aesthetic, crowd, and mixing skill. This is a constantly moving target, which is one of the things that makes DJing so exciting.

CZ: What’s next for you on the musical front? Any new releases or gigs you’re able to tell us about?

RB: I’m fielding offers for several releases with 3 EPs and a full album confirmed and in various stages of development. I have a slew of live gigs in May, several of which are out-of-town debuts where I am booked along with some of my biggest influences. I am also in the process of booking a European tour, with one show confirmed, I am going to be in Europe for the whole month of September, so holler at me!!

CZ: Any new music (of any kind) that you’re really feeling and would like to gush about?

RB: Damn there is so so much, this one is always hard because I am a rabid music fan and am constantly looking for new, exciting tunes. I’ve really been into Powder, the Japanese producer and DJ. I love how she structures her tracks. I open my mix with a track by a young producer out of NYC named AceMo. The release that features the track I played is coming out on April 24th.

CZ: Last but not least, if there’s one thing about Bermuda — food, place, people, weather, attitude, anything — you could transport into the Bay Area, what would it be?

RB: The beaches, the water, and more black people.