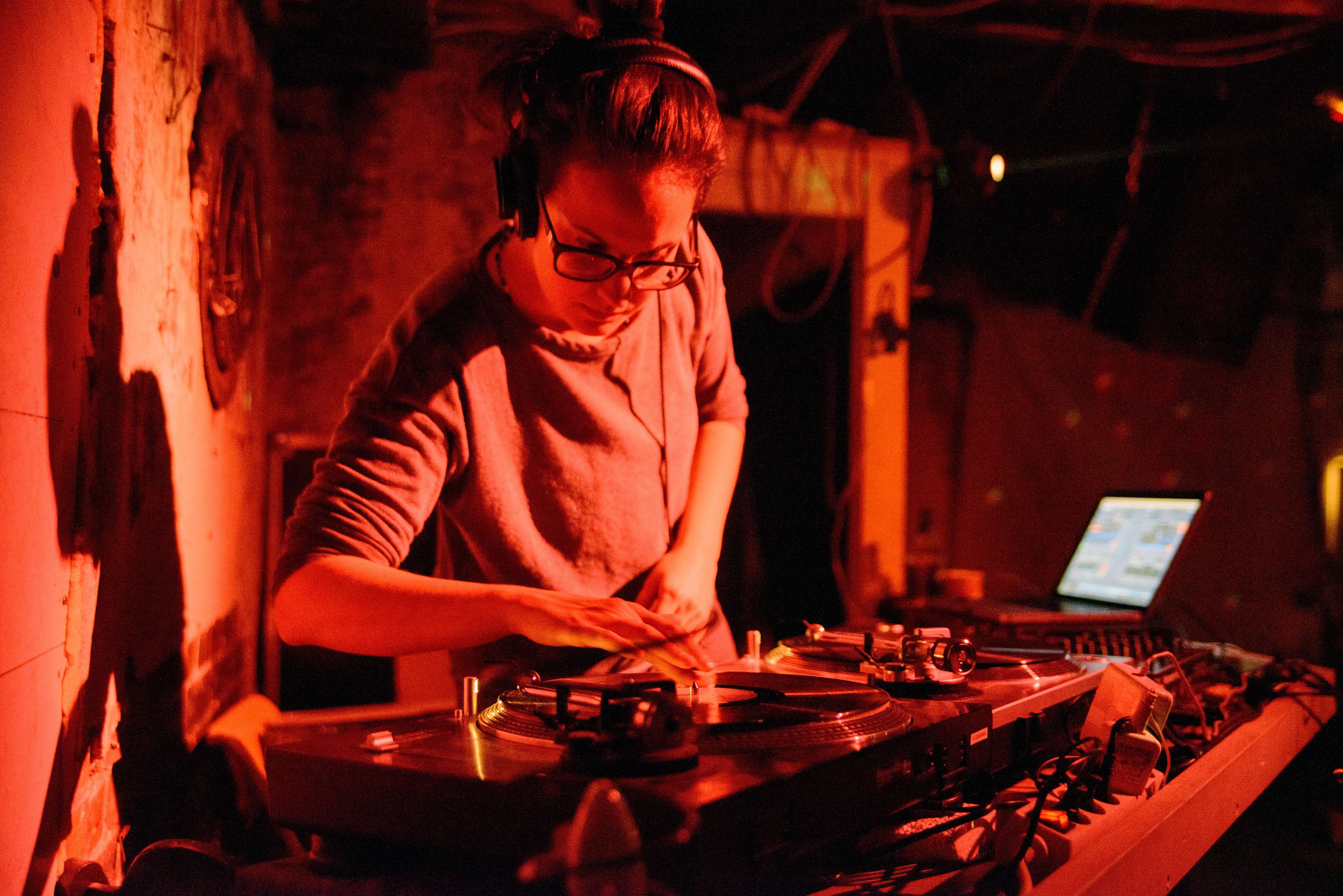 Interview by Chris Zaldua.
As You Like It’s next podcast comes courtesy of Experimental Housewife, the alias of the multitalented artist and performer Evelyn Malinowski. Malinowski currently resides in Santa Fe, NM, but will soon become a San Francisco resident, and has connections well beyond — in Denver and Berlin, just to name a couple.

As Experimental Housewife, Malinowski released her debut album, Place Writer, on Jacktone Records last year. It’s a melange of original sounds and productions with sampled loops and tidbits, described as a “conceptual DJ hybrid album.” It’s dreamy, trippy stuff, sounding something like a techno record heard while half-asleep, in which bits and pieces of tunes and tracks drift in and out of your consciousness.

Malinowski makes her debut for As You Like It this Friday, June 30, supporting Kassem Mosse and Mor Elian at Monarch. Read on to find out more about her process as Experimental Housewife and her AYLI podcast:

CZ: Tell me about Santa Fe. I’ve never been, but have always wanted to go. I know there’s many artists out there — how’s the music scene?

EM: I haven’t been in New Mexico very long, actually — just two years! Seems like longer to me too, ha. The state in its entirety is totally mind blowing, and I really love it. Happy to be moving to SF for now, though.

As far as underground music in Santa Fe, there isn’t much interesting stuff going on. There’s a little crew and DIY space called Etiquette who I’ve worked with a number of times now. One member is a noise and sound design-y type artist named Angelo Harmsworth, who has also released as Halouzka. Super nice guy with great taste, and the crew throws some loud and banging dance parties alongside a variety of noise performances. They’re the only folks in town who like hard dance music and who also come from the noise scene.

CZ: Have you spent time in the Bay Area? I know you have quite a few connections here. Do you have roots here?

EM: I grew up coming out here. My oldest sister lived here for a long time so I’d come out pretty often as a kid. I always loved it (of course) and wondered whether I’d ever live here. The friends I’ve acquired out here are just from the techno community. I met most folks through Chelsea [Faith, aka Cherushii] and after the fire, but there are a few people who I know from other lands and spaces. My wife has a similar story, and her family is still out here, so there are some roots there.

EM: Experimental Housewife is a name I got from someone who poked fun at the way I do things around the house. It was when I was living in Berlin, and the situation was very much so based on cultural differences. I started using it immediately to do performance and noise production, and continued to DJ under my old name. After a while I let the ExHouse thing take over, as well as the ambient mashing-up. I started DJing ambient and drone at some point, and then as time went on, I did it to make a point about layers and new sounds. That’s what led me to making the Jacktone release. I’m glad you like the term — please spread it!

Place Writer is my first solo physical release, yes. I have some digital albums, and I’ve collaborated quite a bit with other artists who have released works physically.

CZ: As a follow-up, tell me more about yourself as a producer vs. a DJ — which came first? And how do both practices relate to each other in your own work? Does either come before the other, or are they equal parts of a whole?

EM: I actually started DJing when I was 10-11, so that came first. I got into electronic music via late night radio and MTV’s AMP, and I’ve been collecting ever since. I made a makeshift DJ set up with two boombox stereos, and later learned how to work on turntables when I was about 14; I even had a brief residency at 15 at a club in the town I grew up in (I played trance and it was awesome). I played some of the local warehouse parties too, all late 90s. A bit later I got into college radio and hosted two shows called DrooL Music, Parts 1 & 2. Once I got to Berlin, I played with some neat small crews like No Fear Of Pop and Expatriarch.

Alongside DJing I was drumming in post-rock and noise bands. I have done that off and on up until recently when I started making solo material electronically. I’m just starting, and I see my productions like DJ sets, yet I see my DJ sets like productions (sometimes).

I definitely think I bring the drummer’s multitasking and rhythmic mind to DJing. I also have the noise musician’s tinker and experimenting habit. I love straightforward, accessible sets, but I can’t help but to layer and mash things up as much as possible. I love long mixes and returning to the starting point. Again, that’s how I did the Place Writer album: mash-ups, layers, and loops, with some original instrumentation (guitars, vocals, keys, drills) on top to coat the sounds and help pull them together.

CZ: Although I’ve never experienced one of your DJ sets personally, I get the sense that your approach to DJing is anything but conventional. What does DJing mean to you?

EM: I’m really not sure what conventional DJing is because everyone has a different approach. To me it means layering sounds, telling a story, and letting the music speak for you, as well as others in the room. I also like playing hard sets and getting people to head bang. But yeah, for me it’s about spinning a story, watching the the record turn, and seeing the differences in movement in the room, all relative to the 33 revolutions per minute (sometimes 45, obviously).

I sometimes see DJing like essay writing. I’m also a writer and college professor, so I often see a set as an argument or persuasive presentation, wherein you have to keep true to your own ethics while articulately convincing others of at least seeing — at best, conceding to — your point.

All in all, I think DJing is an intermedial mode for sonic narration and collage. It’s so complicated and spacious, and yet the output can be so simple, pure, and completist. It’s also about risks and breaking out! I always really appreciate it when DJs make a point to do things that surprise or even shock listeners.

CZ: Tell me about your AYLI podcast. What’s it all about — how did you put it together? Was there a specific vision you had in mind when you were preparing it?

EM: I wanted to pay tribute to SF’s flare and history of vital electronic music curation. I really love Freaky Chakra; he’s one of my longtime go-to’s. I kind of built the set around that track, and I also wanted to play awesome tracks by some friends, like the first song (two people from my Berlin crew) and later with Noncompliant and Doc Sleep. I think on that same note that I wanted to sort of celebrate the community with listeners, as the North American scene has some major gems coming to light right now. Otherwise, I think some of my recent determined mindset made its way into the mix, as the mix is pretty restless until the very end. There’s a lot I’ve been rearranging and trying for in the last few months both professionally and personally, so I think my proactivity comes through in the mix (or not).

CZ: What separates a good DJ set from a great DJ set for you personally?

EM: Again, I place a lot of value on DJs who take risks. That in and of itself can mean all kinds of things to people, including playing a super tight, genre-compliant set. I think people need to be challenged in they are in a tranced state of mind, though, and I think that’s best done by throwing down songs and mixing in a way that catches people off guard. Other than that, I like a visceral journey to be conveyed too. I think between Pavel Ambiont’s 2010 mix for Unsound and Jarvi’s recent VODERcast, (and also Sasha’s Global Underground San Francisco — disc one), a perfect DJ set exists.

CZ: What is some new music that you’re really feeling these days? Any genre or style — not necessarily dance music specifically.

EM: I think friends’ labels are just really doing some rad stuff right now. VODER from Philly-ish area is an incredibly well-informed, well-curated label. Very excited to see where they land in a year or two. Also Wage Slave from Iowa/Ohio is some serious shit. They just got picked up by Lobster Distribution, so that’s exciting. That music needs to reach more people. Jacktone is an exciting intersection. I think they are modestly raising the bar in a profound way. I also really like what Geographic North are doing. Outside of that, I follow Mörk and an artist called ALEKS closely. 0Helena0 has some great stuff, as well as Raw Tools and Kimochi Sound. I’m also a huge Fred P. fan.

As for style/genre, I’m still seeking out moody, ambient, atmospheric stuff that’s on the lo-fi side of the sound quality spectrum.

CZ: Last but not least: what’s on the horizon for you? Any Experimental Housewife releases or gigs you can share with us?

EM: Apart from the AYLI party, I’m closing a Communikey one-off in late July. There are a few other things in the works, but nothing is confirmed quite yet, so I’d better not say anything! I also just became a resident of Run The Length Of Your Wildness, and I’m thrilled to be part of the crew.

Release-wise I’ve got some stuff coming out on a Berlin label called Antime, a track on the next VODER compilation, and a remix for Wage Slave. I’ve got an album coming out on a very rich, under-recognized label called Human Ear Music. They’re also based in Berlin. It’ll also have some remixes, including one from Roche, as part of the package.

There’s some other stuff, but I’ll just leave ya hanging.