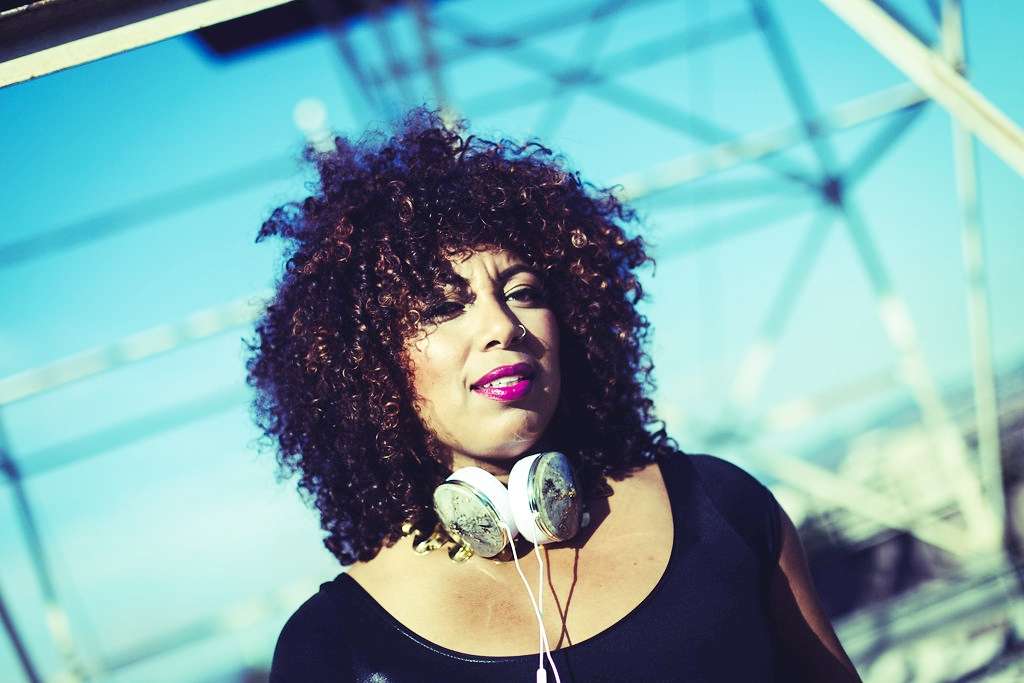 INTERVIEW: Chris Zaldua.
Deep and deeper still goes Oakland DJ Nina Sol‘s new mix for As You Like It’s podcast series. Originally from the East Coast but a Bay Area resident for 14 years running, Nina Sol has been been DJing for nearly as long, threading the needle between disco, funk, soulful house, hip-hop, and beyond.

She’s a resident DJ at two monthly parties in Oakland, Constellations (second Thursdays at Starline Social Club) and Elements (third Saturdays at roving locations). You can read more about those parties and Nina’s own crate-digger upbringing in the interview below.

Nina Sol makes her As You Like It debut this Saturday, August 18, for an open-air day party (1 p.m.-9 p.m.) on The Midway’s sun-kissed patio. She’s supporting Detroit’s funky house maestro Kyle Hall and jazzy beat-maker Byron The Aquarius. Dive into her stellar mix below — and catch her live behind the decks on Saturday.

NS: I was born in Washington D.C but moved to San Diego when I was pretty young. I grew up just 10 minutes from the Mexican border. After college, I wanted to move to a city with a bigger music scene, either NYC or the Bay Area. My older sister was already living up here and so I choose San Francisco. I moved here in 2004, and then moved to Oakland a few years later, the Bay is definitely home to me.

CZ: Where did your relationship with music begin? What music did you fall in love with in the first place, and what has kept the flame burning for so long?

NS: My parents love music, especially jazz. I was actually named after Nina Simone. I grew up hearing soul, jazz, funk, and Latin and Brazilian music. At the same time, my sister was into alternative rock, new wave and metal. We shared a room, so I definitely heard that. I mostly listened to R&B and 90s hip-hop. Our Mom was pretty strict about what we listened to, so I would keep a secret radio that I would listen to after she had gone to bed. I listened to late night with Eddie Love religiously. I slept through a good portion of middle school because I had to get my music fix!

In college, I worked in the computer lab right around the time the files-haring platform Napster came out. All of sudden, I discovered an entire world of music I didn’t have access to growing up in San Diego. This started my love affair with the beat scene (J Dilla changed my life), electronic, house and broken beat. I was always making mixes of my discoveries for friends. Through my love of hip-hop, I was digging for samples and collecting records. I was especially attracted to themes of protest and black power found during that era of music. I considered myself a Hip-Hop Feminist and spent a lot of time listening, studying and discussing music online.

The flame is kept alive by the constant discovery process — there is so much music I have yet to hear and understand, and there are new sounds coming out every day. It’s overwhelming, and yet an addiction.

CZ: On a similar note, when did you first encounter a memorable DJ, or simply DJing in general, and what inspired you? When did you realize you wanted to become a DJ yourself?

NS: In 2006, I moved into a house full of DJs in San Francisco — that was my first introduction to “DJing” and where I finally had access to records and turntables. Those guys were great and kinda just threw me in. I started playing records on Tuesday nights at Skylark in the Mission District, mostly playing soul and hip-hop. I remember seeing DJ Spinna at Mighty and his set blew my mind. I knew him as a hip hop producer and hearing him play house, disco, and soul music so seamlessly was exciting. Rich Medina provided a similar experience, I had no clue what I was dancing to but it felt good and the groove was infectious. I knew then that I wanted to have that kind of impact as a DJ.

CZ: All DJs have their origin stories, but I’m curious about the first time you really felt you “arrived” as a DJ, and really felt in control of a dance-floor, or a vibe, or a crowd. What was that moment like? Did you learn any lessons that have stuck with you?

NS: I opened for Les Sins a few years ago, it was a sold-out show and a really young crowd. In those moments, the pressure to move the crowd is high, but I stayed true to my sound and they went on a journey with me, it was dope, so much love felt from the crowd. I often get pegged as a soul/hip-hop DJ or soulful house DJ, but this gig allowed me showcase so many other styles from footwork to techno, disco jazz, baile funk, etc.

I love to travel and collect records from around the world. I also had the incredible opportunity to spin and go record digging in South Africa. I was DJing at a small bar in Johannesburg and I met a guy who invited me to spin for locals in Soweto (Black Coffee was literally spinning around the corner later that night). I was so nervous, but they loved my flavor of house music and that experience gave me the confidence and opened my eyes to the possibility of more international gigs in the future.

CZ: Tell me about your AYLI podcast. How’d you put it together, and is it fairly representative of yourself as a DJ?

NS: I started with a few songs that I love and built around that. I recorded on one turntable and one CDJ, which is pretty characteristic of always having one foot in where I started and another in where I’m going. Towards the end, I ditched the laptop and dug into my vinyl collection. When I record a mix, it’s always about having a point of view and telling a story. I love sample based music. This mix showcases the richness of Black music and its vast expression: it’s gritty, playful, emotive.

What is most representative of my style is that it is multi-genre and it will take folks on a journey. It can feel random at times, but when it’s executed well, there is a tight groove.

CZ: Tell me about Constellations and Elements, two parties for which you’re a resident DJ. Where do they go down and what are they all about?

NS: Constellations is a monthly party, every 2nd Thursday at Starline Social Club that pays tribute to artists born under the zodiac sign of the month. This month, it was Leo artists, which included Whitney Houston, Ali Shaheed Muhammad (of A Tribe Called Quest), Timmy Regisford, Tony Allen (Nigerian drummer who played with Fela Kuti), Madonna, and Bilal to name a few. Not only do we play those artists but those that sampled them, those they sampled, remixes, collaborations and it ends up being a deep catalog of music to pull from. It was started by myself, Wonway Posibul, and DJ heyLove*, two other amazing DJs. The party keeps us diggin’ and remaining creative with the challenge of presenting so many eras and styles of music in one set.

Elements is an ode to deep, soulful dance music. It has become a dance ritual that happens every 3rd Saturday, with my mentor and legend, Patrick Wilson. The night centers around soulful and deep house, but always showcases different flavors of South African house, techno, Paradise-style garage, and deep disco cuts. We have built a beautiful and accepting space where folks can have that spiritual, transcendent experience. The sound system we provide is an experience in itself. We play on a rotary mixer and 3 CDJ set-up which is super fun.

CZ: I must say — your bio, which usually is little more than a simple promotional tool for many DJs, is resonating with me deeply. “DJs are the modern day griot — maintaining history through musical storytelling…” To me, that is the essence of what DJing is about — and more than that, music writ large: developing and fostering community. I wonder if you’d tell me about how you developed this conception, and perhaps an example of the way that music has helped you bring people together (and pass the gospel on, as it were).

NS: It is both a privilege and responsibility to soundtrack a moment in time. It can be a struggle to DJ and promote parties at times when there is so much madness, pain and suffering going on in the world. I am constantly reminded that music and dance is healing and builds community. I love when people thank me for taking them to another place and allowing them to completely release.

CZ: How do you go about picking tracks for a gig? Another way of phrasing the question: What kind of tracks do you find yourself drawn to as a DJ?

NS: I am always listening for groove, and songs that give me a distinct feeling. Spacey, funky, gritty, and soulful. I realize that is not a very scientific response (ha!) but I listen to hundreds of songs and just trust the immediate response from my body. I pull from a lot of different genres so the challenge is always figuring out how to weave them together. I try to find songs that can serve as bridges from one sound to another, so that it doesn’t feel too abrupt, but sometimes abrupt can be good, wakes people up. I rarely repeat the same set, so I am constantly thinking about how to present the music differently. I love creating themes for a set and usually will have a perspective going into the gig and depending on the event will freestyle and vibe with the crowd.

CZ: Last but not least, tell me about some new (or new-to-you) music that you’re enjoying and inspired by. Doesn’t have to be dance music — any genre, any style.

NS: This question is always hard because I go through so many music phases! I am loving the heavy bass sound coming from a lot of Atlanta artists such as Stefan Ringer, Byron the Aquarius, Abra, Fit of Body and the WERC crew. I’ve also been collecting more vintage gospel records, and digging the new Children of Zeus and the Internet albums.