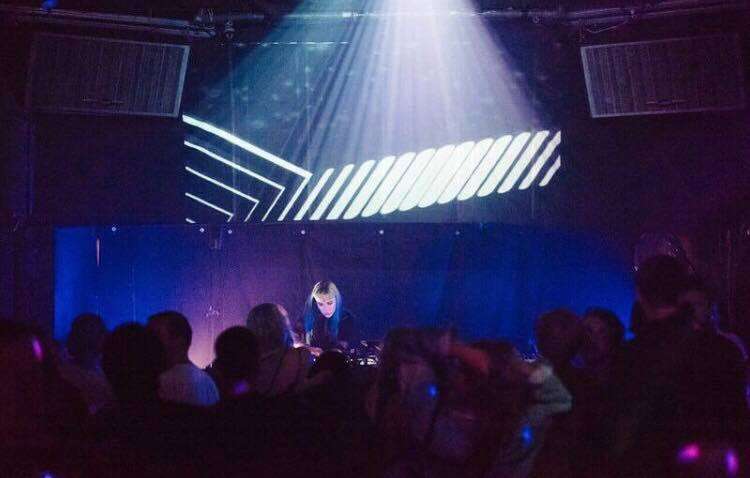 For techno lovers, San Francisco dance-floors are a good place to be right now. Techno with a capital T — fast, tough, rough, and rugged — has taken the city by storm, and that’s in no small part thanks to the efforts of people like Lindsey Herbert and parties like Robot Ears, the techno-focused crew she’s worked with for years.

After nearly six years running, Robot Ears has brought some of techno’s most well-known players (Speedy J, Chris Liebing) plus new-school favorites (Truncate, Tommy Four Seven) to San Francisco. Lindsey’s been one of their resident DJs for almost as long, honing her craft and pushing a deep, psychedelic techno sound.

The latest edition of As You Like It’s podcast is mixed by Lindsey Herbert — and it’s a session recorded live, opening for British techno purist Ø [Phase] in March of this year. Dive into the mix while you read her interview below — and make sure to snag presales for Spanish maestro Oscar Mulero‘s return to San Francisco, landing Friday May 31 at F8.

LH: I grew up in the suburbs outside of Los Angeles, in a city called Agoura Hills, and lived there until I was 18. Then I accepted at San Francisco State University and moved up north in 2014 to study. The Bay has been my home base ever since then, except for one year of studying abroad in Stuttgart, Germany. This city has been the place where I really got to explore as a DJ and it has helped shape who I am as an artist today.

CZ: What made you fall in love with electronic music? In particular, what brought you towards the harder and stranger veins of underground techno and ilk?

LH: I was into songs with electronic elements ever since I can remember. In my early days I was super into alternative and punk rock and rap/hip-hop for a time. Once I discovered dance music, I had explored many different genres throughout my first few years as an attendee of raves and I eventually landed at house and techno. I started out with more mainstream artists at festivals and I was inspired to keep digging deeper, seeing what else was out there. I discovered warehouse parties in Los Angeles, like Interface, some years ago — and I must say that the underground vibe is my favorite of all. Then going to Movement Festival after parties and various clubs and festivals in Europe solidified my love for trippy, dark and psychedelic techno. Ever since I started to search for more obscure and left-field music, I have really only taken an interest in the headier, weirder stuff — music that isn’t always focused on the drop, but showcases minor changes that evolve over time and atmospherics that transport you to another world.

CZ: When did you first start DJing? What inspired you to get behind the decks yourself?

LH: I taught myself how to DJ at the age of 16 with Traktor. At this point, I was already a regular attendee of dance music shows, but was just getting out of my EDM phase and into deep / UK house. I bought my own setup and started religiously posting mixes once a week. I had so many special, life-changing moments being in the crowd at shows, and it left me feeling inspired to be able to provide people with the same moments. I always said that if I was able to improve someone’s day or give them a special moment to remember through music, then what I am doing is worth it. Once I moved up to the Bay, I got my first gig at the age of 18 and actually had to DJ with a fake ID for 3 years — worrying each time whether I’d be able to get into the venue. It wasn’t long before I picked up my residency with Robot Ears and it’s been a great ride so far.

CZ: You’re also a producer. Tell me how you started writing your own music — what sort of sound and vibe are you after? Do you have any releases under your belt?

LH: Yes, I began producing 5 years ago around the same time I moved to SF. I started studying audio engineering in school, which has taught me a great deal about mixing music. It’s been a lot of learning as well as the technical aspects such as making sure you have a good mix. These few years I have been exploring my sound and feel like the vibe I go for is deep, trippy, melodic, but also driving; similar to the music that I am attracted to listening to and playing — but with my own spin of course. A lot of the time I just start making something without a real intention and just see where it takes me. I think I will eventually start another alias to separate my “peak hour” music with my deeper/dubbier/more experimental and leftfield side.

I do have a couple releases under my belt now. First is a remix of Martyn Päsch’s track ‘Sacred’ on KVLTÖ Records which came out in September 2018. The most recent is my first solo EP on Ascetic Limited, titled ‘Eine Reise durch den Geist’ (in English: “a journey through the mind”). This EP includes 2 original tracks and a remix by my good friends who run the label, Motionen. I’m already working towards my next release, so hopefully I’ll have more news regarding that soon!

Additionally, Anthony Jimenez and I have started a duo together called Alterity and we are working towards building a label together.

CZ: Tell me about your As You Like It podcast. How’d you put it together? Did you have a plan or goal with this mix? Is it fairly representative of yourself as a DJ?

LH: This podcast is actually a live recording from my opening set from our event with Ø [Phase] back in March. My goal with this set was to play a deep, melodic, and rolling warm-up before the headliner, which has been really enjoyable for me to do. I believe opening sets are a challenge and a great chance to show control in your music selection, not just play bangers (although I love being able to to that too!) I play according to the situation: the time, how many people are there, the type of venue, sometimes depending on who else is on the lineup. I am always adjusting and don’t just play in one style. That being said, my sound always incorporates an element of trippy-ness, deepness, and atmospherics. I enjoy getting to play ambient in situations where it fits. When you see me play an opening set, though, this mix is usually the type of stuff you can expect from me.

CZ: How do you usually prepare for your DJ sets? Do you like to come in with a plan, wing it as you go, a little bit of both, or something else altogether?

LH: I like to go through my music and sometimes make a playlist for a show with tracks that have the kind of vibe I’m looking for. Sometimes I just go in knowing the first and last track that I’d like to play. I also organize my music by energy with star ratings in Rekordbox, so sometimes I just draw from there. I always bring my entire collection with me in case I just want to feel out the mood. I love playing longer sets for the chance to really get into improvising and feeling it out as you go.

CZ:  Tell me about your musical projects outside of DJing and producing — you’re now running Robot Ears yourself, right?

LH: Well, I just am finishing up college and have gotten really into working in sound design for films, including foley and its recording as well as post-production. I am hoping to pursue work in this field in the future!

Also yes, I have been running Robot Ears for about the last year and a half. Previously I had been the social media manager for several years as well as a resident, but I got “promoted,” if you will, to being the booking manager, venue coordinator, handling logistics, and just running things in general. I have experienced the challenges of being a promoter in SF; I have learned a lot and it gives me a whole new appreciation for everyone else trying to push more obscure music in this scene. It’s been awesome to curate special nights with the sound I believe in.

CZ: What’s some music you’re listening to and loving? Could be old, new, dance music or not — what are you hooked on right now?
LH: Lately I’ve been pretty into just electronic music; in my down time I listen to a lot of dub techno, deep/psychedelic techno, and ambient / drone. Some of my music idols are Luigi Tozzi, Oscar Mulero, Evigt Mörker, and Inigo Kennedy — to me these people are musical geniuses. The way they play with texture and melodies is just so beautiful and it leaves me feeling very inspired. I also really love Boards of Canada and found a lot of inspiration through listening to their music. I’m a big fan of Warmth’s ambient productions along with The Gods Planet too. Some of my favorite labels at the moment are Semantica, Hypnus, Oslated, Pole Group, Norite, Nonplus, Circular Limited, Greyscale, and Newrhythmic. I could go on for days with artists I love, it’s really hard to narrow it down.