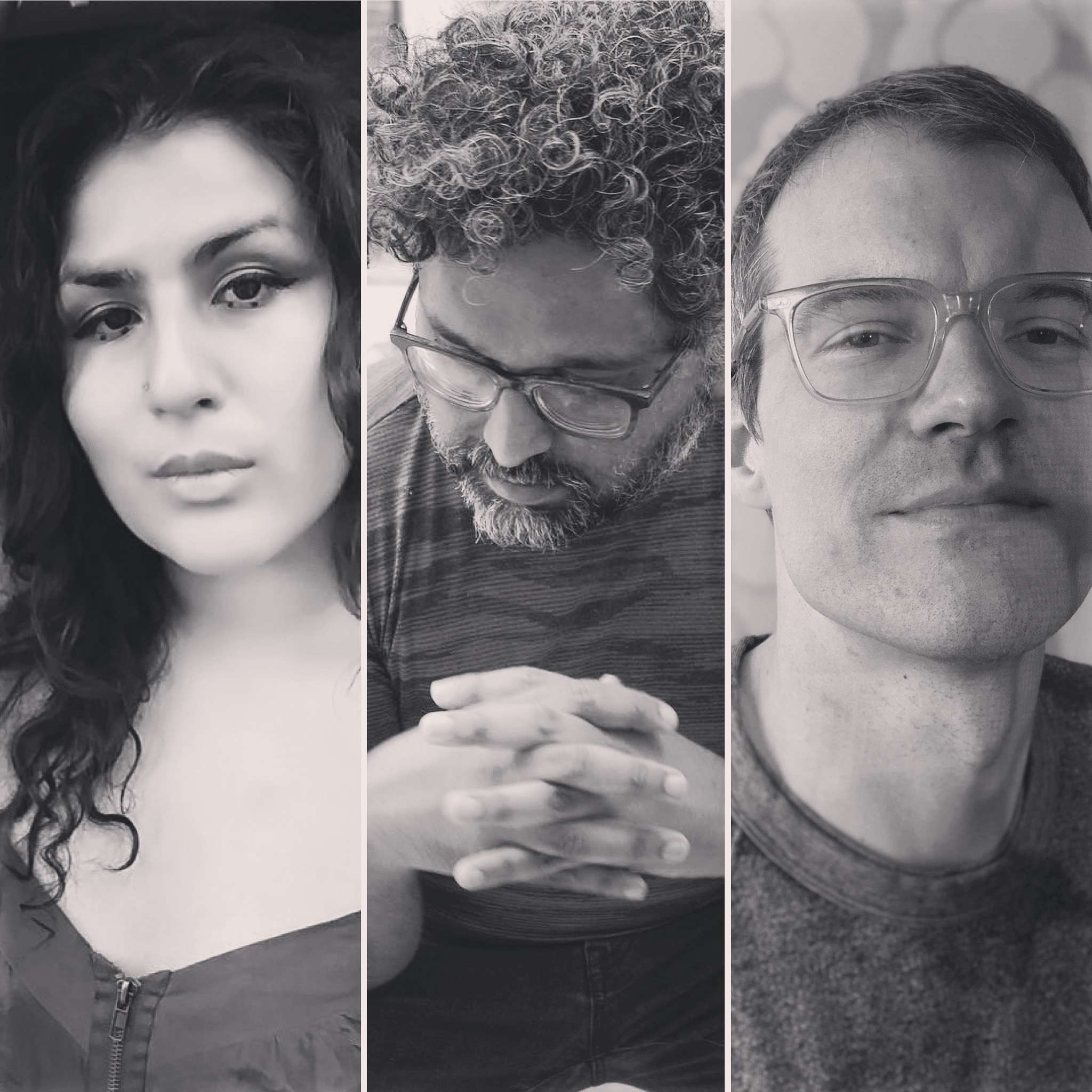 If the weirder end of club culture is what wets your whistle, you are probably familiar with TVOD. (The club crew, that is, but probably also The Normal’s tune that provided them their namesake.) The crew’s members — Nihar Bhatt, Jason Polastri, and Fanciulla Gentile (aka hardware techno evoker The Creatrix) — have been operating at the fringes in the Bay Area for more than a decade running.

You might know them from their first project, Warm Leatherette, which exposed many listeners (like me) to the endlessly cool synth-flavored music came out of the ’80s punk scene. Or Haceteria, which focused on classic acid house sounds alongside live hardware techno. Surface Tension, which exposed full-throttle dance music to chin-scratching art crowds and discomfiting experimental music to diehard club kids. (Full disclosure: I was a part of Surface Tension, too.) Those projects are done, but TVOD continues the legacy.

They’ve contributed the latest edition in the As You Like It podcast, and they’re holding down the fort in the back room of F8 all night long on Friday, December 13, while Chris Cruse and Mozhgan headline the front room alongside AIDA and AYLI resident DJ Patrick. Read on to find out more.

JP: I grew up in Half Moon Bay and moved around a lot in my 20s (including a couple years in China where I first DJed in bars) before moving to Oakland in 2010, pretty soon after Nihar and I met and started doing the nightlife thing.

FG: I was born here, family moved away after Loma Prieta Earthquake. We moved back to the Bay when I was a pre-teen. I’ve moved away several times after as an adult but I always come right back. It’s where I feel the most comfortable.

NB: I grew up on the east coast near Baltimore and spent most of my young adulthood in Washington, DC, and moved to the Bay Area in 2006 mostly because it felt like it would be  a free-er place to be myself.

CZ: Nihar and Jason, tell me about your musical partnership specifically. I know it goes way back, and the name of your current collective, ‘TVOD’, is a play on that. How’d that come to be?

NB: Jason and I have done 4 different event series together over the past 10 years. In 2009 we started Warm Leatherette, which was a party based on the emergent “minimal wave” obsession of the time. A couple of years later we were involved with Haceteria, which celebrated late 80s and early 90s house, acid and rave musics and heavily featured “live PA” sets. In late 2013 we founded Surface Tension, which centered itself on the darker evolutionary techno and post-techno sounds of the time. I think that there has been a natural progression from mining the past to highlighting the weirder sounds of the present and future, but I think what has made Jason and I have such sure footing in our partnership is that we never had any ambition to scale up or do things on a more commercial level. We have been dedicated to the rougher edges of the underground since the beginning, and that has never changed whether we had 10 people at our events or 400 (which is the actual min and max of attendees at our events this year). Fanciulla has always been a major influence on both myself and Jason, when it comes to having a ground up view of the global music scene, and getting to partner with her in an official way like this has been invigorating.

T.V.O.D. builds on all of that history in a way that mimics the Alien Quadrilogy.

Warm Leatherette was like Alien: cold, raw, exquisite, and low tech with an atmosphere that very much represented its time and place.

Haceteria was like Aliens: us at our most fun, but also our most dumb. Egg sacks full of baby bedroom producers and DJs played their first set there.

Surface Tension was Alien 3, in my opinion the best and sexiest Alien sequel, but also the most misunderstood. Greater political content injected and with the brooding threat of everything collapsing around us always present.

T.V.O.D. is our Alien Resurrection. The world has ended several times already and human alien hybrids are running around the station wreaking havoc. There is no mass appeal to this story but for those who know it’s a strange mood that hits all the right notes.

JP: Amen to all of this. There have been fat and lean times for us in clubland over the years but at this point I trust the creative intuition of Nihar and Fanciulla pretty much unequivocally, and don’t spend much time worrying whether or not we’re steering the ship toward the rocks.

CZ: Broadly speaking, how do you think TVOD fits into Bay Area’s electronic music landscape? What sorts of sounds are you trying to push and promote?

JP: I think we are “techno-adjacent”… we are rooted in techno and musical strains that historically mutated and fused to become techno, but we kind of haunt the margins. Much of what we’ve done together, including collaborations before TVOD, has been about bringing “outside” or non-commercial sounds and performers into a club context. In this iteration we’ve really been thriving off partnerships (or maybe kinships) with other DIY crews and arts orgs.

FG: We’re much like the flora you see growing in neglected lots around a city.

CZ: Tell me about your AYLI podcast mix. Was there a concept or theme behind it, and was the mix recorded by all three of you? Is it reflective of your usual DJ sets when you’re playing out?

JP: I recorded the mix myself because Nihar and Fanciulla have been occupied with a run of live performances here and in LA. I used my home equipment: a couple Technics that I got for a song ages ago from Jason D. who ran the Robots in Heat blog, plus a Pioneer DJM-600 on long-term loan from my friend Raj who used to spin electro in Geneva in the late nineties. Pretty simple.

There wasn’t an explicit theme but as I pulled records for the mix I found that I was really responding to warped vocal bits in almost all the selections I ultimately landed on. I’m not a very technical DJ and I lean heavily on connecting tracks that make interesting friction with one another. Separate tracks may have individual parts that kind of rhyme with each other but can hit the ear or heart completely differently depending on how they’re used in each track. Listening for commonalities across otherwise big changes in vibe or timbres ups the drama and makes mixing feel like a process of playful mutation. Nihar once called it an “improper” style and I think that fits.

I tried to pick tracks that I thought Nihar and Fanciulla would like… there’s stuff in there I personally would really enjoy dancing to but it’s definitely not a straightforward club set.

CZ: Speaking as someone who has worked with all of you, I know you’re interested in surfacing the non-normative aspects of club culture. Wonder if you could take a moment to write about what this means to you, and how you see this tying into your work with TVOD.

JP: I think we share a contrarian, or critical, or anti-commodification stance in general that colors the way we look into and around club culture.

FG: I’m always intrigued witnessing the parallels of what happens in a commercial setting like a club/bar and what happens in more DIY underground spaces made for live music across genres. Not being tied to a specific venue feels freeing in the sense that you can just focus on letting the important things emerge at the party. The important things being weird sounds, radical politics, messy feelings, etc. We are merely facilitators.

NB: I am more and more convinced every day that for dance music to evolve and thrive, and for the artists who make it to endure, we need to find ways to decommodify it as much as possible. We need to socialize the means of dance production. This isn’t a utopia that emerges out of thin air but it does mean to me that we need to find spaces that aren’t dependent on turning a profit, and models that can be flexible enough to weather the ups and downs of attendance that it takes to grow and experiment and change. We need to invest in local and “under the radar” artists, and double down on doing it “for the love of it” because if we don’t we will be bled dry. Our partnerships with places like pro-arts are part of that, our mutual support with other underground crews is part of that. We will always look for more ways to push things in that direction.

CZ: What makes a really great party for you? Who (or what) inspires you as DJs?

JP: Feral energy! Musical surprises, an open format, values of spontaneity and intuition. Warmth, welcome, and inclusion. Other Stranger is a great party in SF right now because the bookings are fearless, the atmosphere is accepting, and a single night can feel like it has many distinct movements that nevertheless complement each other really well. Selwa/Bergsonist and all her projects (Bizaar Bazaar/Pick Up the Flow/3AFAK/etc. etc.) are so inspiring because of how expansive her vision is— how devoted and trusting she is of allowing a creative process to take its own course. Outdoor raves in Oakland! People who keep making crazy new music despite everything that makes this an almost certainly terrible idea in 2019.

NB: Everything Jason said is right on. I’ll add that I like an event that has a relatively non-hierarchical relationship between DJ and dancer. Dancing at a club can be a collaboration, a performance in and of itself, and should, in my opinion, never be seen as a consumption activity. Getting to do events at the dance studio Counterpulse has been an education in this, as their staff and extended crew put so much energy into the dance portion of the equation. Besides, everyone is a DJ these days, everyone is a producer, and everyone is losing money at the event. Let’s just embrace this as something we are doing together.

CZ: Last but not least, would love to hear about some music you’re listening to lately. Could be new, could be old, could be dancefloor fodder or not — just new to your ears.

JP: I’ve been liking Wizard Apprentice’s Ratskin record and especially their live show; the Michael O’Shea reissue; Isabella and Liquid Asset, on record and live, together and separately; Zaliva-D’s Knekelhuis record, still on heavy repeat since it came out in 2018; the Ben Vince track “Assimilation”; and some 90s guitar music again.

FG: I’ve been getting back to classics lately. Diggin through a lot of Susumu Yokota, Eliane Radigue, Soul, Jazz.

NB: Speaking of Selwa/Bergsonist, her new record that Optimo Music is putting out is incredible. I can’t stop listening to the sound samples. Hiro Kone is my musical hero and has an Earth-shattering new album out. I love the newest release from the band Chasms. I’ve been rocking Sho Madjozi and Yves Tumor all year. To be real what has been on my headphones recently has been classic Chicago house tracks by Larry Heard, Adonis, Marshall Jefferson, Jamie Principle. I don’t quite know what it is about this music but I always come back to it. I feel like it’s a core part of my spiritual center at this point. I love the way that the music is both soulful and playful. It sounds really different than what I produce and play a lot of the time but it is really central to my musical being regardless.