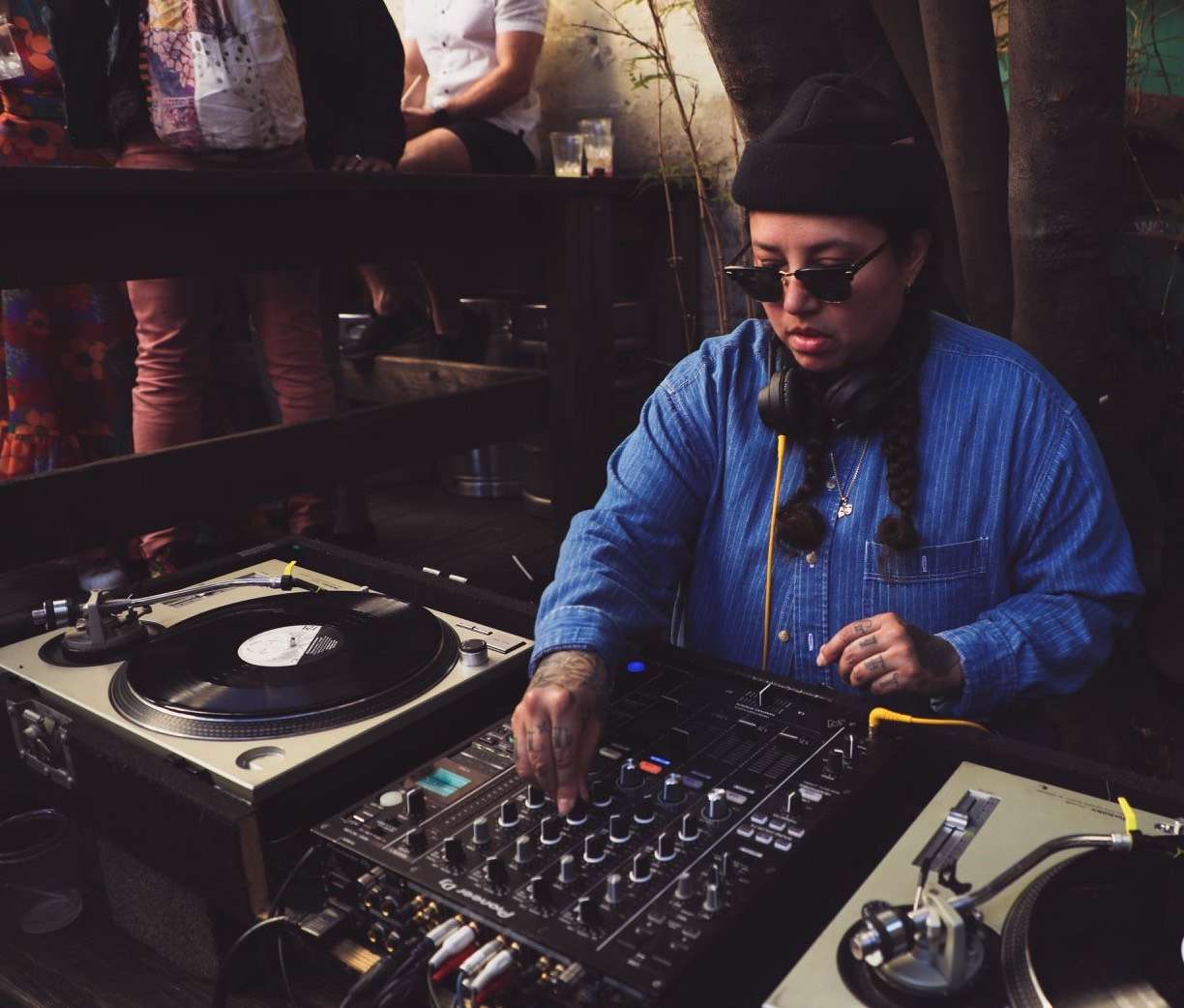 It’s late afternoon on a San Francisco summer day. It’s sunny, maybe — maybe. You’re in the south end of the Mission, right by where Mission St. intersects with Valencia St., and you walk past storied queer dive El Rio. There’s a line of folks — most clad in brightly colored tank-tops, shorts, skirts, overalls, and everything in between — all the way down the block. Vintage soul, doowop, and rhythm & blues, complete with scratchy vinyl overtone, blares out onto the sidewalk. What’s going on?

Hard French, of course. For more than a decade running, the storied queer party has brought the sound of soul (and more) to San Francisco dance-floors. El Rio‘s glorious patio has always been the party’s home base, but as the party’s grown up, they’ve grown out, too: Hard French often produces stages during San Francisco Pride, one of the biggest local events of the year.

DJ Brown Amy co-founded Hard French, and has been DJing their parties since the very beginning. She’s got range well beyond soul, as you’ll hear in this latest edition of the As You Like It podcast. She’ll warm up the floor this New Year’s Eve, as AYLI closes out the decade at Underground SF with an all-star cast including Christina Chatfield, Austin Cesear, and murky techno legend Rrose.

BA: I’m from Wilmington and Long Beach, down in Southern California. I moved up with an ex partner and friend just to try something new and find a queer community.

CZ: You’re a core member of the Hard French crew, hosting and DJing queer outdoor soul dance parties for as long as I’ve been going out in San Francisco (which is 2010, but I bet HF has been going on longer than that). In party years, that’s an eon. What are a couple key lessons you’ve learned over a decade (ish?) of throwing parties?

BA: So HF is celebrating our 10 year anniversary next year. The biggest thing I’ve learned is to stay true to the integrity of your party because it’s the only thing you can control.

CZ: Hard French has always been about soul music — which has deep roots in dance party culture but might not be the first sound that springs to mind when folks thinks ‘dance party’ today. What do you love about soul music? Why does it make such great dance music?

BA: I think soul music makes great dance music because it’s real. You can hear that and feel it through the energy of the music.

CZ: You’ve got range well beyond soul, dipping into house music, funk, boogie, and electro. How do you typically plan your DJ sets? Do you bring a little of everything or do you usually reach for a certain sound and then stick with it?

BA: Because I play such different music I curate each set according to what event I’m playing. Like one night I’ll be playing sweet soul, and the next electro. My goal is to figure out how to combine all the genres I love in a way that makes sense.

CZ: Tell me about your AYLI podcast. How’d you put it together? Was there a theme or concept? Is it typical of the DJ sets you play out?

BA: I just recently went to Berlin and came back with a bunch of records — I’m excited to share those on the AYLI podcast.

CZ: What makes a killer party for you, as an attendee? And as a veteran party host, what is the key to making a party great when you’re the host?

BA: Like I said before, keeping the integrity of your party is most important to me. And when you got black and brown women in the crowd, then your party is poppin’.

CZ: What’s next for Hard French and/or you as a DJ personally? Anything exciting you can share?

BA: So HF has some big stuff coming up next year for our 10 year, like throwing multiple parties, a music change and I get to DJ alongside one of my favorite DJs — stay tuned for the announcement. I’m also playing with Egyptian Lover and Luca Lozano, January 17th at Public Works, and I’m super hyped!

CZ: Last but not least, tell me about some music you’re loving lately. Could be old, could be new, just new to you — any genre, dance-floor or not.

BA: I get really stuck on certain tracks and will listen to the same track for hours. Some of my favorites as of late are Aaron Bloomfield – gonna miss ya, Clausell – Let me love you, Nemesis – heartbreaker, Local Artist – touch tone, anything on Thank You Records, and the list goes on and on….