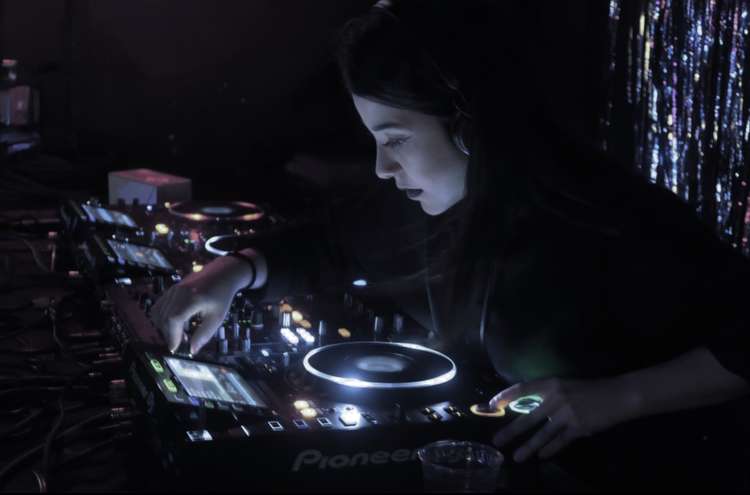 It’s not a common topic of discussion, but it’s my firm belief that a great name is an integral part of a great party. Take Supervixen, for instance, a new-ish project launched by Evita Salazar that celebrates the feminine and the dance in equal measure. Even if you don’t know what kind of music they’re into (more on that below), how could you not have a good time at a party with a name like Supervixen? Everything you need to know is right there in the name.

Supervixen’s coming up on their two-year anniversary (June 26 at Underground SF). Before that, though, they’re hosting the Klub Room at 1015 Folsom on Friday, February 28, a whole-club blowout co-hosted by Dials, As You Like It and 1015 — grab tickets while you can.

In advance of their first collaboration with AYLI, Supervixen resident DJ Vaughan mixed up the latest edition of the AYLI Podcast, and we interviewed her and founder Evita Salazar to learn what makes them tick. Read on, dig into Vaughan’s mix, and catch them at 1015 on February 28.

CZ: Tell me where you’re both from and how you landed in the Bay Area.

ES: I’m Venezuelan, I moved to the states 11 years ago and landed in San Francisco about 8 years ago, my mother and brother both live here and I wanted to be closer to them and I always dreamt of living here so I took the opportunity. Due to the situation in my country I have never gone back, and now this is home, very grateful for it.

TV: I’m from Nicaragua, I moved to the Bay Area about a year and a half ago. Before coming here I was living in Mexico City where I was studying a music course at SAE. When I finished I went back to Nicaragua, things were really bad in my country and I had to leave. Thankfully part of my family had already made the decision of moving here, so when I decided to they were already here ready to receive me and give me all their support. I’m very grateful to be here and very grateful to everyone who has given me their support, I love San Francisco and this is my home now.

CZ: When did you both fall in love with electronic music? I’m thinking both from a musical sense and a community (i.e., ‘club scene’) sense. Any particular moments or events that stand out and made you want to commit?

ES: It all started in the late 90s with Everything But the Girl and The Prodigy, later on Chemical Brothers‘ Surrender came out, I was mostly into rock and metal, but this album started shaping my listening into a different direction. Back then MTV was cool and I started to get into Daft Punk as well. I remember when I watched Modjo’s music video for Lady (hear me tonight) for the first time I could feel something sparkling in my brain but I couldn’t really understand it. I kept on being mostly into rock and metal until I got into college. A good friend took me to my first rave for DJ Craze before I was 21, that was the night that changed everything. When I moved to this country I started working in the nightlife industry and years later I landed my first gig booking electronic music shows which have inspired me to create my own events to bring community together through music.

TV: Growing up in a family full of musicians, music has always been a very important role in my life. Since I was very young I learned how to play piano and guitar, I started listening to rock and metal in my early years, then eventually listened to old school hip-hop, I went through a lot of music phases trying to find what I really liked but nothing moved me as much as the day that I heard techno and house. Ever since that day, life started to have meaning, and everything was just more clear and bright.

It all started in this club from back home named Uruk Kali, it was the day that my life changed forever. I was about 18, I remember Klaus Ahlers and Immolat playing and I just thought to myself, ‘what is this music? What is this place? I love it.’ As I kept following all of the electronic music scene I eventually ended up going to Magma Fest, a magical festival in Ometepe Island. This festival has been very important in my life, everytime I would return home from it I would be so inspired by all of the music that I heard, that I would go home directly to search for music for hours. I continued hanging out with people in the scene and made a lot of amazing friends through the years most of them are DJs, they truly were a big source of inspiration to me, and I knew that I wanted to become a DJ like them too. After watching a lot of YouTube videos, seeing my friends play and practicing at the after parties I taught myself how to DJ.

3/ Tell me about Supervixen. What’s it all about? How did it get started? Who is involved?

ES: After starting to book shows for the venue I worked for many years as a bartender (Monroe SF), I wanted to have my own event that represented my character better. Growing up I felt a lot of competition between women around me, it was hard, I always hung out with the boys. So I thought that it would be amazing if there was a way for me to make us work together instead of against each other, then I put the two together and decided to have an event where I could focus the bookings on femme local talent and create a space for all of us to work together with music.

At that time I got offered to start a party at Underground SF,  then one day while I was going through music and stumbled upon a Garbage album (Shirley Manson was always is still a big inspiration) and that’s how I came up with the name of the party, in honor to one of my childhood idols. Shortly after I invited my good friend Ivana Karpierz to be a resident, we did a full year of great shows. Eventually Ivana wanted to move on with her own project (Baba Yaga’s Lair) and I took a few months off to gather new ideas. I brought the party back in November 2019 and announced my three new residents: 888, Vaughan and Ally AF. These girls are all new to the art of DJing and are constantly blowing my mind with their talent, very proud to work with them!

4/ Tell me about your DJ practice, Tatiana. When did you start DJing? Are you inspired by any particular DJs or technique? What does being a great DJ mean to you?

TV: I started DJing about 2 years ago, I taught myself through Traktor and YouTube, it’s been really fun. Ever since January of this new year I started to learn how to play records. It’s my main challenge right now.

It’s been quite a journey, after months of playing things that I wasn’t completely sure that I really liked I finally found myself and the sound that I want to transmit.

The DJs that Inspire me the most are Identified Patient, Lena Willikens, Helena Hauff, Vladimir Ivkovic, Carlos Souffront, Solar, and Mozhgan.

CZ: And tell me about your AYLI podcast — how’d you put it together? Was there a theme or concept that you worked with when putting it together, and is it a fairly typical representation of yourself as a DJ?

TV: I improvised through all the podcast, I literally grabbed this hard drive full of music of old and new playlists and just let my imagination and creativity take the lead on it. I had the most fun recording it and I feel like it came out very natural. I definitely feel like this set represents myself as a DJ, I think it’s been my favorite so far, I feel it projects the way I’m feeling right now, which is accomplished, motivated, happy and just ready to push forward.

The music selection is mostly breakbeats and techno.

6/ What makes a great party for both of you? I’m thinking about this as both club-goers and party hosts. What makes you feel like you’ve had a great night out?

ES: I’ve been really finding myself having a lot of fun at parties that don’t necessarily have a huge headliner, I love going to Underground SF for shows like Konstruct, They’re Here, Vague Terrain to name a few. There’s a lot of elements that will make a party a great night for me personally: the vibe all the club goers bring into the dance floor, and bookings that take me back into a time and place, or just something that makes me feel like I’m leaving my body, having a space where I as a woman feel safe (this one is huge for me).

Whenever I’m hosting an event I feel like we can have a packed dance floor or not and if the vibes are right and those 30 people or 150 people that were there had a great time  then we had a successful night.

TV: I feel like the main factors of a great party is having quality sound, a nice venue, good artists, the vibe and people that go there for the love of music. It is definitely hard work, I always give huge respect to those that can pull it off.

I have to point out that the crowd that turns up is a big part of how good an event is as well, a crowd where no matter what gender you are, what color, or what sexual orientation you are, the only thing that matters is the respect that everyone has for each other, a safe place where there are no misjudgments and you can express yourself.

CZ:What’s coming up for Supervixen? Any news you can share?

ES: Some very exciting news indeed! We are hosting Klub Room at 1015 Folsom for the Maya Janes Coles show. Also we are bringing the party back to its original home Underground SF! We will celebrate our second anniversary there on Friday June 26th.

CZ: Last but not least, tell me about some new music you’re digging. Could be new or old, but new to you — what are you listening to?

ES: My music taste is something that is on constant rotation, I listen to everything not just electronic music, I love Disco, Reggae, Dub, Jazz, Bossanova, Salsa, Ambient. I still spend a lot of time going through rock music and shows. I also spend a lot of time going through podcasts and record labels like Acid Camp, Squirrels on Film, Secret Studio Records, Dark Entries, The Bunker, Fault Radio, Discwoman, DaisyChain, Noctuary, Dekmantel, Honey Soundsystem and AYLI 🙂