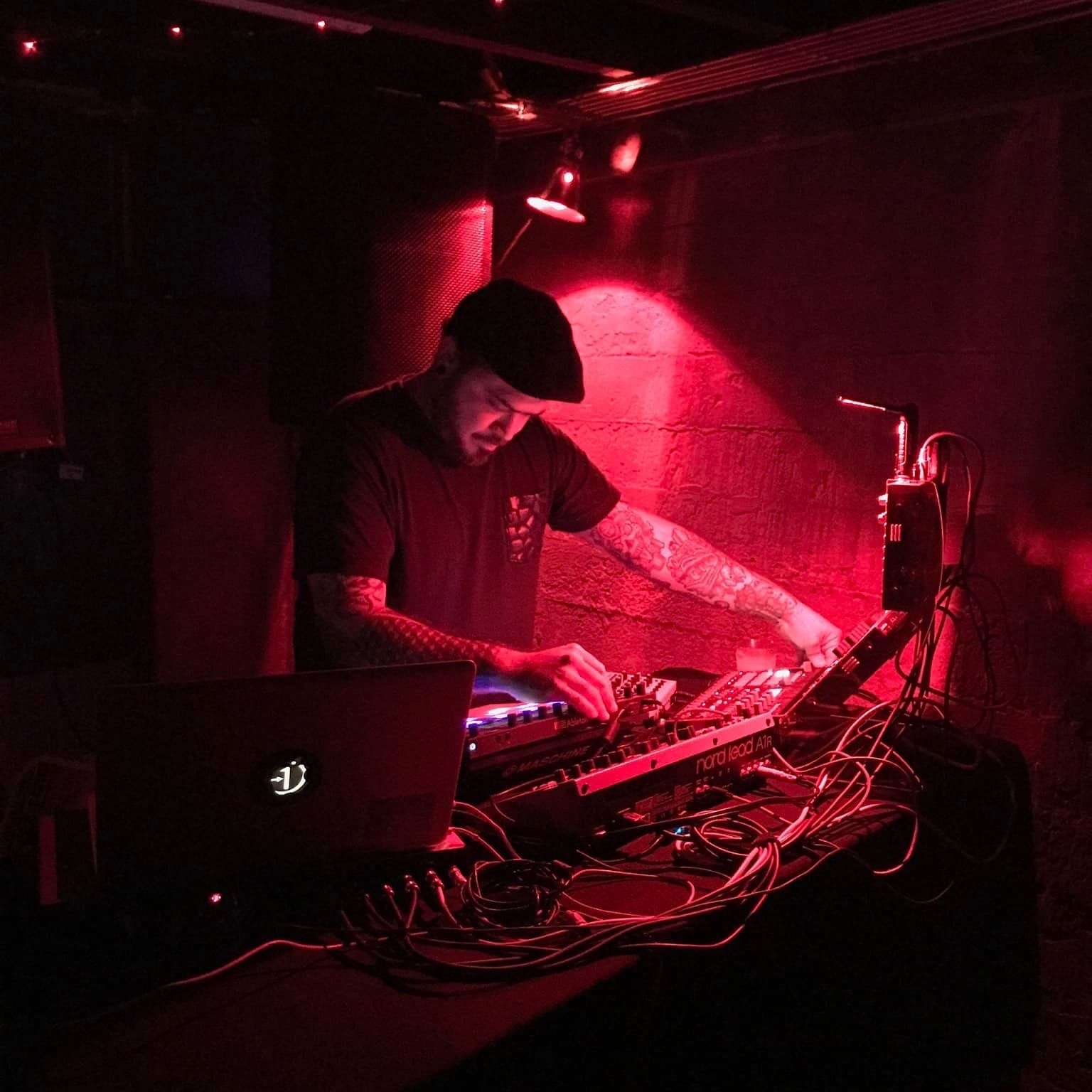 As You Like It, like all of you, has gone on full lockdown. All of our shows over the coming several months have been cancelled or postponed to an undetermined date. However, in the coming days, we will release a series of podcasts and interviews as planned before COVID-19, supporting and showcasing local artists that were scheduled to be on the bills.

If you live in San Francisco and like techno — Techno techno, with a capital T — then you probably know Hiram Fabrizio. One of the friendliest and kindest players in the local scene is also one of its most talented — and most active. You might know him from Konstruct, the no-nonsense techno monthly he’s a part of. Or U-SRD, his duo project with Loammi Rodas. Or Eichef, his solo production moniker.

Or you might know him from bumping into him on a dancefloor at a club, a warehouse, or a house party. He’s a genuine supporter, in it for the love of music, not to build a brand or make a name. It’s a refreshing reminder of why we’re all here to begin with.

As Eichef, he’s responsible for mixing up the latest edition of the As You Like It podcast. It’s an hour-long “slower mix of electro and techno unfolding into world sounds,” in his own words. Give it a listen and read on to learn more about what makes him tick.

HF: I am from Mexico City and landed in San Francisco at the end of 2010. Wow, that was ten years ago!

CZ: How did you get involved in the electronic music community? When did you fall in love, and what made you decide to put in the time and work to be a part of it yourself?

HF: My first electronic music event was in 1999, in an abandoned movie theater in Mexico City where Acid Maria was playing. My best friend had an older brother that knew a lot of people in the late 90’s underground in Mexico City and that’s how I started attending electronic music events. I was 14 years old, and at the time I was following the national and Latin American Ska and Reggae scene, but it didn’t take me too long to go full on the electronic music world. It wasn’t until 2009 that I met this crew “Neloa,” they were throwing underground penthouse parties in downtown Mexico City, and eventually I became a resident — and a year after I moved to San Francisco.

CZ: You’re involved in many music projects here in San Francisco — as a DJ and organizer and producer. Can you tell us about those?

HF: Yes, I’m involved in three projects with some incredible people. The first one is a Techno duo called U-SRD with my brother from another mother Loammi. We started it in 2016, and we focus on live performance. My second project is Konstruct, a monthly party at Underground SF focusing on promoting techno artists from the US. Konstruct was launched early in 2018 by Rubidium and JX-216 aka Milkplant, and U-SRD joined a few months after, and I began to help with organizing the events as well as being a DJ resident.  And the third one is my solo project that you’re hearing now as Eichef (pronounced like you’re saying “H-F,” which is my initials ha!)

This is my solo project where I try to reach a wider range of music on my live PA, my own productions, and DJ sets.

CZ: Tell me about your AYLI podcast. How’d you put it together? Did you have a theme or concept in mind?

HF: The whole track selection is from artists that inspire most of my productions these days, a slower mix of electro and techno that can also unfold into world sounds.

CZ: Tell me about your music production work. When did you start recording your own music, and what inspired you? What is the sound and vibe you’re hoping to create in your own productions?

HF: My music production flow is based on recording jam sessions from my hardware into Ableton. Then I process and arrange these recordings into tracks, and also create stems that I use for my live performance, which I combine with my 3 tier Elektron rack and other pieces of hardware to do some kind of improvised live programming.

It all started with my first DAW, Rebirth RB-338 By Propellerhead, around 2001. That was when I knew I wanted to learn how to make electronic music but I never put tracks together, I spent a long time learning and trying different software and hardware and it wasn’t until U-SRD started that the first formal tracks came out.

This might sound like a cliché but nothing inspired me more as a young human than seeing Kraftwerk perform live. The sound I’m creating currently is definitely a combination of all the music and genres that I’ve been exposed to and since my production is just starting to flow and make an impact on me I’m very looking forward to seeing the evolution of my sound.

CZ: What makes an unforgettable party for you? I’m thinking about both as an attendee and an organizer or DJ. What takes a party or gathering up a notch  beyond the usual?

HF: A perfect party for me is based on the level of respect amongst all the people involved, attendees, security, bartenders, promoters and of course the music from the artist performing.

A next level event is where you see everyone feeling safe.

CZ: Tell me about performing live. You’re a skilled live artist, playing long, freeform sets. How do you put these together? Are they improvised? Do you find these performances have different energy vs. a DJ set?

HF: I personally enjoy playing a live set over DJing but DJing is also a lot of fun. As I mentioned earlier, my performance in the two projects I’m involved in is a combination of original recording material, and I love to play synths and tweak drum machines in real time so I honestly would say it’s 50/50 recordings and improvisation. The way the two live performances came together was hours and hours of playing and trying different setups until the perfect flow was found.

CZ: Last but not least, tell me about some new music you’re loving. Could be club material or at-home listening (or both). What’s got you excited?

Projects like The Exaltics and 3KZ. And labels like Mannequin Records and FILM, to name a few.