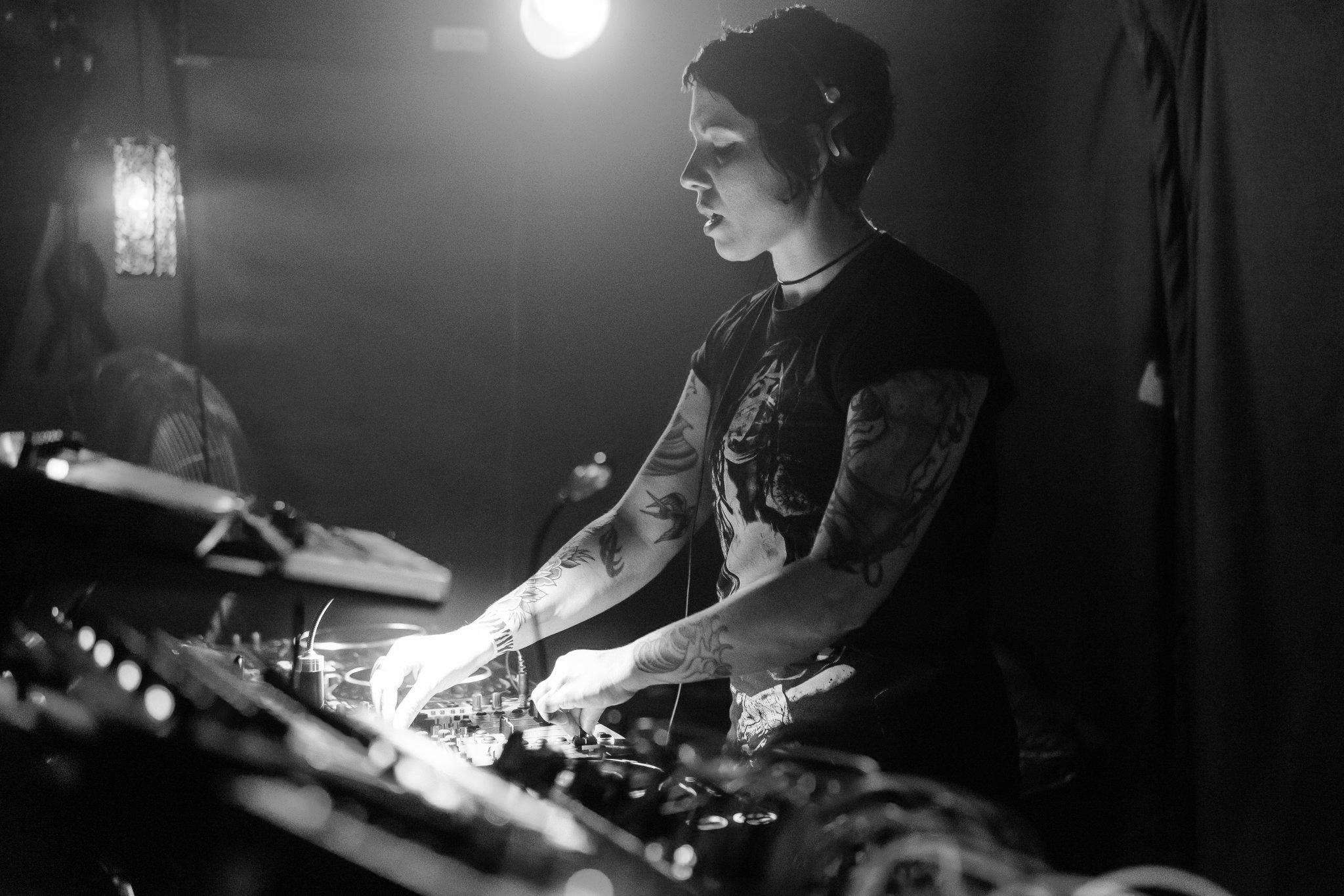 Rachel Bisagni, aka Rubidium, is a techno veteran. Based in Oakland, she’s a DJ, producer, and co-founded the bi-monthly Konstruct event series, which highlights American techno artists.

She’s responsible for the latest edition of the AYLI Podcast, a slow burn of a mix that, as she points out, could very well serve as an opening set in a club — but is really designed for home listening. It’s proper zoning music, and I think we could all use a bit of that right now.

We caught up with Rachel to learn about her background and what keeps her going, particularly right now, in this time of uncertainty. Her insight and thoughtful approach are worth your time. Read on below.

RB: I was born and raised in New England, and then moved to Seattle after I completed university. I met my husband Justin there, and we moved to the Bay in 2010.

CZ: What was your first encounter with electronic music? What made you fall in love? In particular, when did you decide to dedicate yourself to it?

RB: My first (close) encounter with electronic music was through a film called Cool World (1992). It was a half-animated, dark attempt in the wake of Roger Rabbit (1988). I am obsessed with film, and cycled through big dreams of various careers in animation, special effects, direction and production, when I was at a young age. The film’s soundtrack featured artists such as The Future Sound of London, Moby and Brian Eno, and I remember feeling this incredible energy drawing me in through the music while I viewed the film. I purchased the soundtrack right away, and proceeded to freak-the-fuck-out in my bedroom, bowing down to my cheap stereo and liner notes. From that point forward, I was forever on the hunt for my next fix.

What made me fall in love was after training in ballet for most of my life, in 1998-99 I found an alternative arena for expression through rave culture. It was dark, loud, seductive and full of illegal delights. I didn’t have to fit into a mold or obey any rules; it was freedom from expectations and from my own mind. (The drugs weren’t so bad either.) I was sold immediately, and I knew I had to be involved. However, it took many years of being a dancer and party professional to discover what I could contribute later in life.

RB: I think it can mean all of the above. In terms of sound, there are extensive sub-genres and different sounds throughout history, all revolving around electronic music presented in loop-like patterns. I personally equate the sound of techno as the science fiction of music, layering sound effects in repetitive threads. Unfortunately, the word these days is often thrown around loosely as a trendy buzzword.

Some of the popularity rides on the tail of the EDM trend, and although the argument for gateway music stands, I’m not super psyched to see “Sounds of the Underground Vol 56″ or the like for purchase at Starbucks. Conceptually, I’ve always seen techno as a rejection of the status quo, a creative rebellion embracing DIY culture and anti-commercial sentiments. A dark corner to get lost in; a kick drum providing the heartbeat of a dancing crowd.

CZ: I know you’re involved with many projects: Rubidium, Konstruct, From 0-1, and probably others. Tell me about them — what are they about? Are there any others I’m missing?

RB: No, those are the major three things I have channelled energy into recently. Rubidium is my artist name for DJing and production. Konstruct is the bi-monthly techno series I throw with fellow crew JX-216, Eichef and U-SRD; I also do all of the graphics, branding and a great deal of the promotional strategy. From 0-1 is a label owned by JX-216 and Sone, which I have supported through branding and graphic work, since it began in 2008. As far as the future, I am excited about an idea I have, that I am hoping to bring to fruition within the next year.

CZ: Tell me about your AYLI podcast. How’d you put it together? Was there a concept or a plan behind the mix?

RB: It is a slower, deeper mix from me, made more for listening, but still with some feverish energy. It ‘could’ be an opening set at some point in space and time, but I am firmly against formulaic openers, so it’s hard for me to say that. It ebbs and flows, and has an inebriating slow-burn you can get lost in, curated and recorded at the beginning of sheltering in place in California. The track selection ranges from 1996 to 2020. I wanted to revisit some favorites as well as include a healthy dose of artists and labels from North America, the latter being absolutely intentional.

CZ: This interview and podcast comes at a very strange time. COVID has turned the entire world upside down, but the music world seems especially hard hit. I’m curious if you have any thoughts about what the world of electronic music and/or nightclubs looks like after this is over. And just to clarify, there are definitely no “right” answers here. This is a great period of unknown for us all.

RB: This is a big one that Justin and I have been discussing quite a bit, and to be honest I think it could go a number of ways. However, I feel large, wealthy corporations — mega-clubs and festivals, etc. — will bounce back quicker than anything small scale, similar to a McDonalds vs your favorite neighborhood pub. I think the scene in the EU will also recover sooner, because of the large infrastructure that already supports the industry and the touring artists residing there. I think we will have to work harder than ever before, to bring visibility to small/mid-range artists, labels and clubs. It’s a tough pill to swallow.

However, I do think there is a silver lining in that a lot of folks are turning back to production, and ‘maybe’ there could even be a resurgence in underground venues if there were a lot of empty spaces available. It will take time and a lot of support, both in terms of money and morale.

CZ: And considering the previous question, I’m wondering if you have any plans or news to share on the Rubidium or From 0-1 front. I know COVID has made so many existing plans irrelevant, so completely OK if nothing to share right now.

RB: I had some amazing opportunities planned for April. It was hard not to feel emotional about losing those gigs, because the US scene is so fragile and you have to put in a lot of work. However, I quickly realized I now had time to start to set up and plan my new studio space, which I’m super psyched about. Plus, it has given me a chance to think about how I want to focus my energy moving forward, in the wake of this world event.

CZ: Tell me about some music you’re listening to lately. Specific questions: What do you listen to at home, outside the club or party context? And … has COVID changed your listening habits at all? Are you interfacing with music in a different way, or is it more or less business at usual?

RB: I’m trying to keep up with the mixes and releases from my friends and network, there is so much passion and expression out there right now. I’m still working from home, so it allows me to get through a lot of content while I work. I’m browsing what I usually do, from hip-hop to ambient, grunge to experimental and beyond, in addition to techno. However, I suppose music has more meaning than ever to me right now, filling the void, a wistful yearning for stepping out and getting lost in the night.