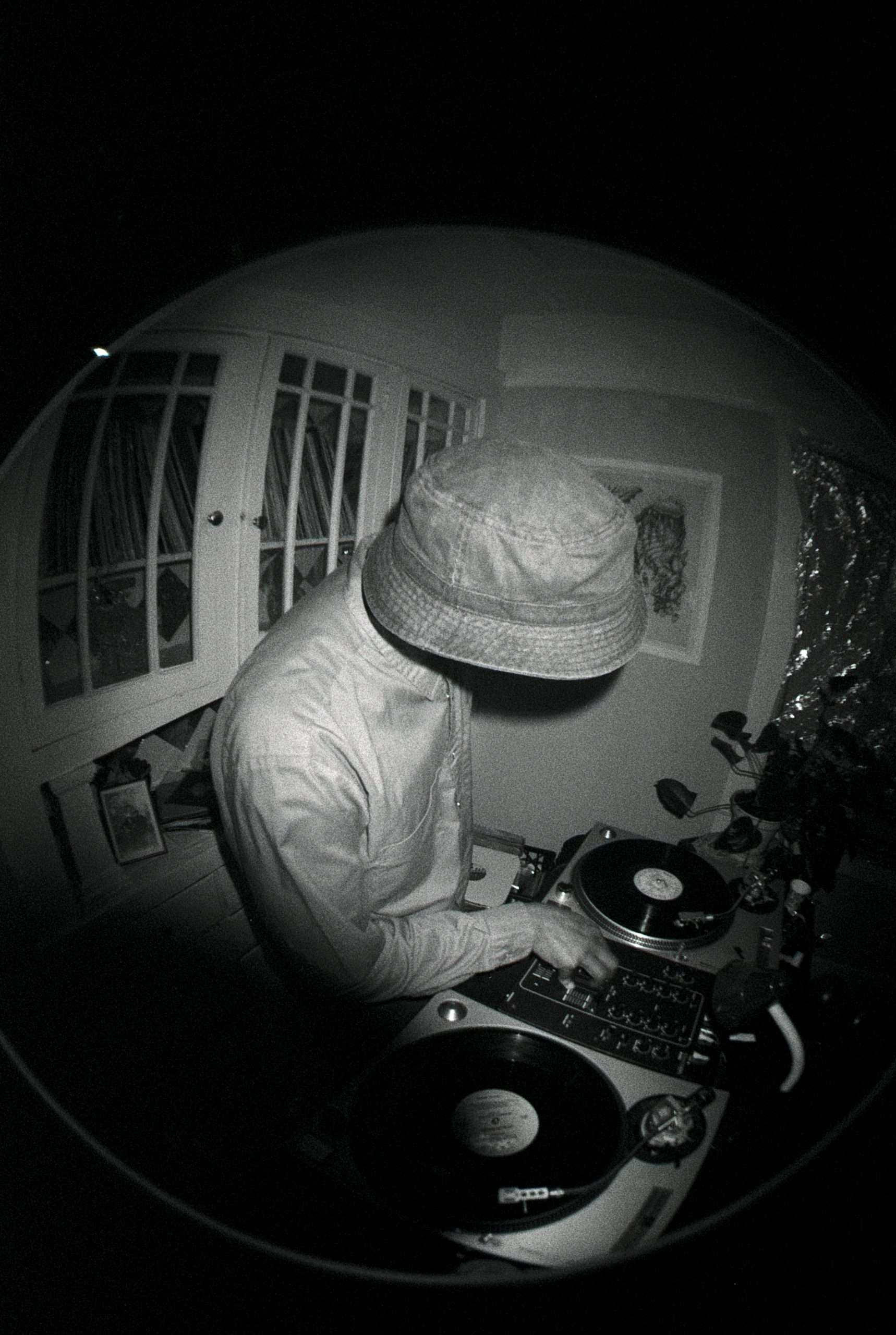 I discovered Space Ghost, the alias of Oakland-based house-funk player Sudi Wachspress, late last year. Turns out I’ve been sleepin’ — Space Ghost has been steadily producing and releasing tunes since 2010, and in the past several years, he’s picked up serious steam, releasing three LPs, two on Denmark’s Tartelet Records and a third on Steven Julien‘s Apron Records.

Wachspress has mixed up the latest edition of the As You Like It podcast, a mellow collection of modern soul, gospel, and boogie-flavored tunes. Read on to learn more about Space Ghost, and dive into his mix below.

SW: I’m from Ukiah, a small town up north. My parents used to live in Berkeley before I was born and then they moved to the country. We often came down to the Bay Area when I was young to visit family friends, and it always felt like my second home. In 2009 I moved down here to go to school.

CZ: Tell me about your musical history — from looking at Discogs, you’ve been producing as Space Ghost for a decade now. What came before? Have you been playing music since you were young?

SW: I’ve been involved in music my whole life. My dad is very musical, he always was playing all sorts of music around us growing up, mostly soul and r&b but really anything groovy he was into. He still has a radio show on a local station in Ukiah every other Saturday night.

All my siblings love music and I’m pretty sure we all at some point had to take music lessons. Somehow I ended up sticking with it the longest. I took piano lessons on and off from when I was a kid through high school. I took guitar lessons for a few years. In middle school I played drums in the jazz band, percussion in the regular band, and I also played in the steel pans band. All the while I played drums in a band my friends and I had outside of school during our teenage years. Eventually I realized I don’t enjoy music through school, I’d rather create my own music. The last 11 years I’ve been teaching myself audio production using Ableton, all the while shifting through different genres and styles of electronic dance music. The Space Ghost alias has been my main outlet for my music the whole time regardless of the different eras of my music career.

CZ: When did you fall in love with electronic music specifically? What got you hooked? And when was Space Ghost born? What kind of influences and traditions drive you when you’re producing as Space Ghost?

SW: I’ve always been fascinated with electronic music, and since I was young I really wanted to have access to a program that could loop sounds and make beats. It wasn’t until the end of high school when a friend of mine showed me Ableton and although I thought it was really cool, I don’t think I immediately got hooked. The name Space Ghost was an accident, I simply was trying to sample the cartoon and saved my project file as Space Ghost. I then just continued to save songs as Space Ghost.

When I moved to the college dorms later that year, I had to leave all my instruments at home except my laptop and midi keyboard. Throughout college I wasn’t very interested in school, I was more interested in messing around on Ableton. I obsessively made beats on my computer most of the time and probably opened Ableton at least every day to try and understand how my favorite artists made the sounds they made.

In the last few years I’ve noticed that my producing skills have finally started to mature. Without a doubt when I listen to anything I made before the last three years, it sounds like someone trying to learn how to make music. I almost wish I hadn’t released as many songs to the world before I was ready.

Now I’m heavily inspired by music from the 80s and 90s because I realize it’s all synths and drum machines and I have access to those same sounds. It excites me to hear a track and figure out how they made it or what gear was used. A lot of the time when I start a new song I simply trace an existing song that I’m really enjoying and see if I can recreate some of the rhythms, chords, or production techniques. Usually if I start this way, it transforms into something new when I get deeper into the process.

SW: My friend and I have an album together from a few years back under the name Seph & Morgan. It’s an improvisational ambient synth album that could fit the sound track to an 80s horror or drama film. Real mellow vibes, it’s called Teamwork.

My friend Steve Sandwich and I have been DJing together for the last 7 years or so as Late Feelings. Initially it was just a way for him and I to record mixes and put them up online under a name together. Eventually we got more involved and started booking shows and events together. Ultimately it’s an outlet for him and I to share music with each other and our community in the Bay.

The other DJ crew I’m involved with is Open Soul. A monthly dance party created by me and three friends, it was put together so we could have a place to spin all the vinyl we were collecting. Ordinarily it’s every first Friday at Starline Social Club. Ultimately I wanted to get involved with a party like this because I really wanted to switch up the style of DJing I was doing. I wanted to play a party based around boogie, disco, and house and be able to play some more obscure music without getting requests. Open Soul gradually turned into a really great night over the last few years. There’s always a positive crowd that’s really getting down, and we like to encourage all types of folks to come. Everyone is welcome.

CZ: Tell me about your AYLI podcast. How’d you put it together? Is there a theme or a concept behind the mix?

SW: With everything going on with the pandemic, I had the idea to make a podcast that took a step away from the dance floor.  Focusing less on DJ transitions and more on song selection, my mix was centered around uplifting 70s and 80s gospel, modern soul, and boogie-like songs. It sorta floats between those genres and a lot of the tracks in the mix are on the slower side. Even though I’m not religious and was raised Jewish, I was enjoying the positive message of the gospel tunes during these times. There are other songs sprinkled in that aren’t necessarily gospel or anything but they just fit the tone of the mix. It’s a nice mellow podcast for around the house but also has some deeper messages if you care to go there.

CZ: Even though it seems we’ve entered into a kind of parallel world the past six weeks or so, I find it refreshing to remember that the worlds and scenes we’ve all built and participated in are closer at hand than we think. In that spirit, I’d love to know a particularly cherished memory of yours with regard to Bay Area music … maybe it was an unforgettable party, an amazing live show, a new local artist you discovered, or a record shop you wandered into. Anything that springs to mind that you love and value about the Bay Area music scene, I’d love to hear about.

SW: In general I miss being able to gather and dance with my friends, either at Open Soul or any other similar parties. I remember getting the opportunity to DJ at Palace last year and it was so much fun to spin House music for almost 2 hours to a sweaty dance floor. I just love the Bay Area’s music scene because it’s super diverse and you never know what sort of experience you’ll get into. I don’t think of Oakland as a House city but I can still find myself in a room full of open minded folks looking to dance. The scene is always growing, and I’m looking forward to future days when we can get together to share some music.

CZ: You just released a new album on Apron Records, which I believe is Steven Julien’s aka Funkineven’s record label (might be wrong on that one). How did that record come together? It looks like it’s doing really well. Do you have any other releases or works in the hopper that you can share news about?

SW: After my first LP release with Tartelet in 2018, Steven Julien caught on to some of the tracks and had them in rotation on his NTS show for a while. I think with a nudge from Tartelet he asked me to put out an EP. The idea was planted in my head towards the end of 2018 summer and I just started pulling together some new tracks. I really was interested in having Apron in mind, because I could approach the songs a bit differently. I always think of Apron as being more experimental yet still very rhythmic and groovy, so I got to try out some ideas in regards to that. Also, as a person of color, it felt great to be a part of a label that seems to represent mostly other people of color. But yeah, the Apron release has been doing great, I’ve heard tons of good feedback and I think the sales were positive. Maybe one day I’ll do a different Apron EP with some fresh ideas.

With all this free time, I’m currently working on some new stuff I’m excited about but not quite ready to share the details. That said, I’m definitely aiming to put out some more music some time this year. One positive thing about loosing my job is suddenly having a lot of time to focus on music.

CZ: Last, tell me about some music you’re listening to right now. Could be new or old, but something you’ve discovered recently and are really feeling.

SW: I’m always an avid promoter of Laraaji, specifically his album Vision Songs Vol. 1. I’ve been listening to it for the last few years now but I keep coming back and discovering more elements I like about it. It’s definitely something I put on lately when I need some peace and clarity. Seriously if you love mellow ambient albums, check this out, it’s such a positive trip.