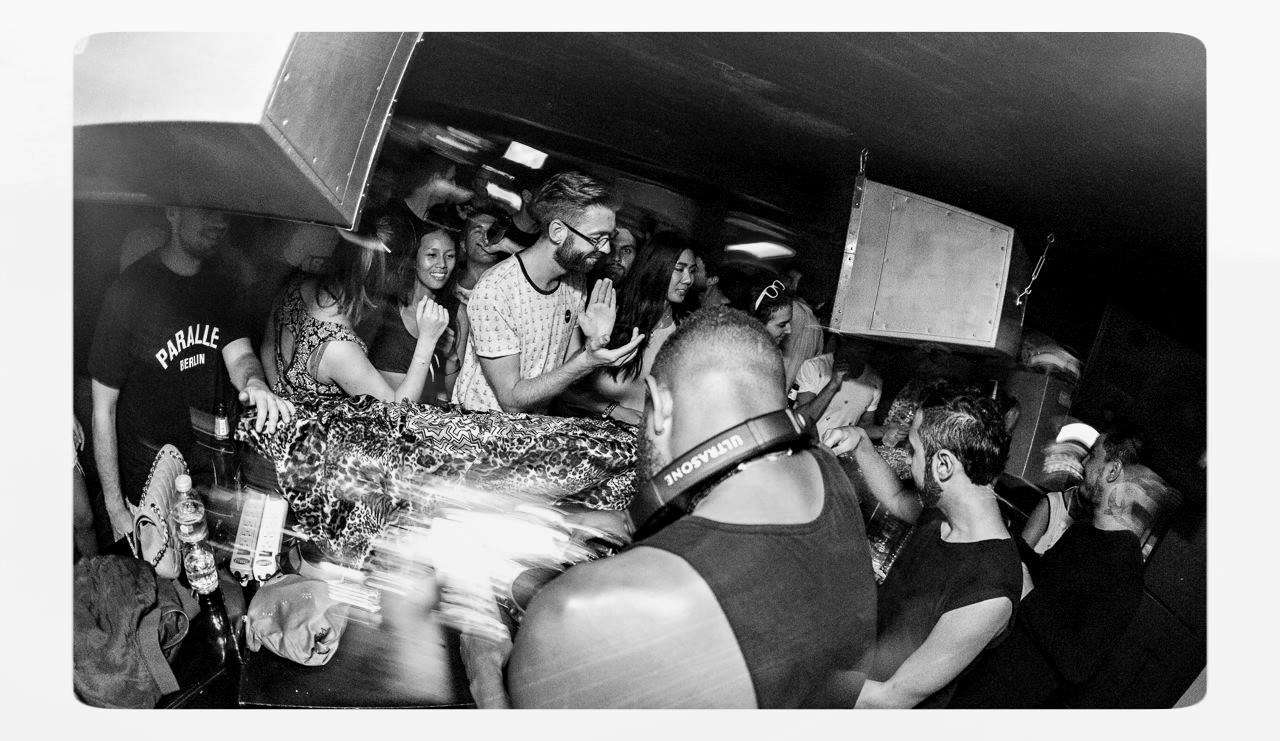 Lando — sometimes Lando Kal, or just Antaeus Lando Roy — has been around the block. Born in Daly City, raised in Sacramento, came up in San Francisco, did stints in New York, Berlin, LA — he’s been around. As a producer, he’s released records on Hotflush, Rush Hour, Icee Hot, and Ultramajic, to name a few. As a DJ, he’s played clubs all over the world, including the ones you namecheck to your friends. His own music and his DJ sets are hard to pin down, picking and riffing on bits and pieces from different scenes and different eras.

He’s also responsible for the latest edition of the As You Like It podcast. We caught up with Lando to ask him a few questions about his roots and about a particularly fertile time in San Francisco, 2008-2013 (give or take), when the creative energy and cross-collaborations in dance music felt one of a kind, and what our communities in SF and LA might look like on the other side of Covid. Read on while you listen to his mix.

CZ: Tell me where you’re from and about your time in the Bay Area. I know you’ve been back and forth all over for the past several years — and you’re off to Berlin again soon.

AR: Indeed, I’ve been based in various places over the last 15 to 20 years really, … I guess I have a hard time making up my mind ha, but as of now my heart is set on landing back in Berlin. I miss it loads and have career plans for the future there.

I’m originally from half Bay Area, half Sacramento I’d say. Born in Daly City and my family lived here in San Francisco for a bit before moving to Sacramento, which is where I was mostly raised. Graduated a year early and went running back to San Francisco at 18 years old. I started Lazer Sword with Bryant and after a long successful stint of touring the world, I was hooked on traveling, finally learning there’s so much more out there in the world.

In 2009 I moved from San Francisco to Brooklyn, New York for 1 and a 1/2 years until making my way to Berlin for 7 years. The last 4 years my wife and I have been between LA, Sacramento, and San Francisco. The Covid 19 pandemic has prolonged our move back to Berlin but we’ll get there soon.

CZ: Tell me about your history with electronic music. What was your first discovery? What got you hooked? And what’s kept you in it all these years?

AR: Well there’s been so many roots and early beginnings for my obsession of all things music and production really… mainly 80s R&B, Funk/Soul, and Disco. When it comes to electronic/dance music, I’d have to say I was first officially hooked on Jungle / Drum and Bass, and House music.

Sacramento had a healthy Jungle / DnB / House scene when I was a teenager. I had a fake ID back then and was introduced to the scene early. 916 Junglist Crew was a dedicated squad back then and threw tons of parties, both legal and illegal. The main functions went down at a place called Scratch 8 in Old Sacramento… grimey ass basement spot but was always packed and bangin’ in there.

Dancing / Breaking was my thing back then and we had our own junglist / house dance squad, starting circles in the middle of the floor and creating a vibe, you know. I’ll never forget those times.

After relocating to San Francisco, the DnB morphed into IDM, to glitchy hip-hop, to electro, and from there back to my House and Techno roots. Fast forward to now, I guess you could say my everlasting love for all things vintage 80s/90s dance music has kept me glued. To be honest I prefer playing old tracks and I’m constantly buying old (and temperamental) 80s gear and still till this day learning techniques used back then to get my tracks sounding more raw and vintage, ha. I guess you could say I’m going backward, but I’m fully content with that.

CZ: Tell me about your musical projects. I know you’ve been writing solo records as both Lando and Lando Kal for awhile now. And before that, you were part of Lazer Sword with Bryant Rutledge. Anything else I’m missing? What have you been working on lately?

AR: Yeah that’s mainly it so far. I have a couple collaboration projects in the works but that’s on the hush for now. Obviously us musicians have had much time on our hands considering the lock-ins and social distancing, etc. No gigs whatsoever so I’ve been finishing up a few EPs, revisiting old projects, and starting to rehearse and plan out a new live set which I’ve been meaning to start for years.

Lazer Sword was a great experience and I owe a lot of what I know from those times. Looking back, considering what I do now, I’d say the music was way busy, micro-edited and extreme ha, but I still to this day respect it and have a good time revisiting that world. You’re always your own worst critic. We were young dudes experimenting and hungry to express ourselves to the world, however it may be. I still listen back nowadays and think to myself, .. How the hell did I create these crazy sounds?! Stuff I’m not sure I could even recreate today.

I do things a lot differently these days. As people may know, I’ve danced around various genres and styles with my solo works. I guess that’s just me constantly experimenting and being inspired. I think it’s healthy for an artist in any artform to regularly push boundaries and test themselves with their work. Keep those creative juices flowing and be constantly inspired, no matter what the medium.

CZ: Since I just mentioned Lazer Sword, it got me thinking about San Francisco a decade ago. In my view, the scene and music in SF around that time was truly special — so much creative energy and talent, and artists and promoters trying new things. Wonder if you agree — and if so, maybe you have a memory to share that captures the feeling of that time.

AR: Man that’s exactly what I mean. Revisiting those days through memory, old live set recordings, and chats with good friends and promoter buddies that were in the thick of it back then. The city was a vibrant plethora of events and talent. That’s what kept us constantly in the studio and playing every possible club that existed in San Francisco back then.

I can truly say that’s what jump started everything for me and made this passion for music and performance a real mainstay. There’s no specific memory that stands out because they were seriously all great times, great energy. So many friends always out supporting, and crazy packed venues, from 222, to Madrone, to 111 Minna, the crazy Mighty parties, Mezzanine, The Stud, Independent, Milk Bar, Rickshaw Stop, Bottom of The Hill, Slims, Elbo Room, I can go on and on, some places you wouldn’t dare think to play, ha. Some sound systems better than others of course, but they were all vibes.

CZ: Tell me about your AYLI mix. How’d you put it together? Is there a concept or a theme behind the mix?

AR: There’s no concept behind the mix and there never really is for me. I naturally don’t really stick to specific categories when DJ-ing out so with mixes I also follow the “no-constraints” approach. I mean there’s obviously tracks in the same vein but I guess my sets and mixes convey the sort of production and writing style I’m currently dabbling with in the studio at that time.

CZ: What kind of DJs and producers inspire you? Is there anything musical at the moment — a scene, a sound, a label, a movement, anything like that — that you feel is particularly fresh and inspiring?

AR: I guess I wouldn’t particularly say what’s inspiring me lately is “fresh” because it’s all been tying into sounds from the past. For a while I’ve been revisiting a lot of late 80s ebm, new beat, industrial ideas yet finding a balance between that and Chicago / Detroit jacktrak house and techno etc. Some Proto Disco and full-on experimental electronic goodies from 60s-80s.

I’m not sure if it helps or hurts, but I’ve been fairly closed off from new shit coming out. Of course I still collect and frequent new tracks from good friends and acquaintances. Maybe it’s because we’ve all been kinda put on hold lately with nightlife, so i’m digging up old tracks and researching history. It’s been beneficial in a lot of ways though, to regroup and noodle around in the studio with caveman gear, haha.

CZ: It feels a bit hard to imagine right now, but at some point in the future, the music world (and nightlife, and clubbing) will return to some kind of “normal.” Personally, I feel like one upside of having all musical gatherings on pause is allowing music organizers and fans the time and space to take stock of the music industry, and its challenges and inequities, in a way that wasn’t possible before. Wonder if you had any thoughts, or hopes, or visions, of what might change — or even how things could be better — once things start picking up speed again.

AR: One thing I’ve noticed a lot being back in the States, particularly California, is that there tends to be this sort of “contest” mentality when it comes to promoters and events coordinators, especially when guest DJs from other countries or cities are on tour or in town. I think the underground dance music scene as a whole between San Francisco and LA (and other locations I guess) has thinned out over the years unfortunately and I think now’s the time more than ever for music organizers and promoters to put heads together and mix collaborative efforts in making festivals and events and club parties special, to revamp and strengthen the communities, when the time comes safe for us to do so of course.

I believe this pause we’ve all been forced to take, will help that idea come to fruition especially because there’s a lot of catch up to do. What better way than to join forces and collaborate for music’s sake. The main reason I do this is because this music brings people together groovin under one roof, on one dancefloor together for one purpose, no matter the color, background, sexual identity, race. It’s a beautiful thing and especially considering these trying times with a lot of hatred brewing throughout this country and beyond, we especially need that togetherness right now.

CZ: Last but not least, tell me about some music you’re listening to lately. New or old, just something that’s grabbing you lately.

To be honest my main everyday listening pleasures mostly consist of anything touched by my lifelong favorites, Jimmy Jam and Terry Lewis. Never fails.