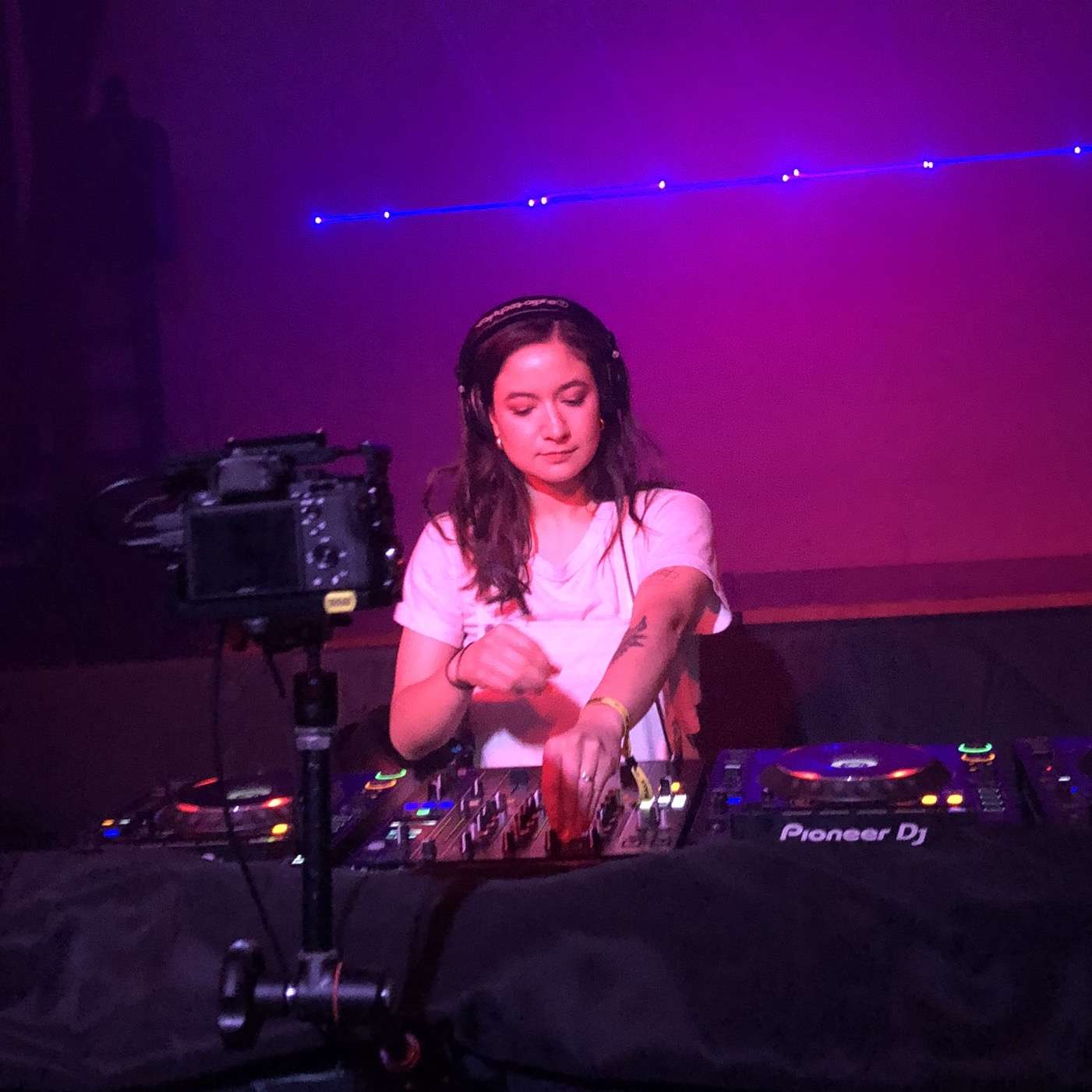 Wonja Fairbrother is a DJ for the heads. She’s been quietly but steadily putting together mixes for years and years now — with her partner Dan as Herzog Hideout and now Do/While; solo, in the beautifully delicate series Wood Glass Metal and the beautifully weepy Melancholy Italo Disco (does what it says on the tin); and increasingly for club-focused mix series, including a recent stint for San Francisco’s Boiler Room.

What makes her such an excellent DJ is that she digs, and digs, and digs. Her selections go beyond the Hawaiian-shirt “electic” aesthetic into truly otherworldly territory. Speaking personally, I consider myself to be a dedicated, knowledgeable music fan with wide-ranging taste. Still, every time I listen to one of Wonja’s mixes, I find myself wondering, What the hell is this — and how did she find it? She, and DJs like her, are who I find myself paying attention to above all else.

Her mix for the As You Like It podcast, published above, isn’t designed to scratch heads, though. To quote her own words, it’s an “i’m not crying it’s just the smoke machine” kind of mix — dedicated to those lost-but-not-forgotten club moments that are regrettably inaccessible right now. Listen in below and read on to learn more about her background.

WF: I grew up in New Hampshire, and went to college just outside of Boston. After graduating I moved to Sacramento for a research job and I found myself taking Amtrak to SF pretty frequently to go to shows and see friends. After a year in Sac I decided I needed to be in a city and moved to the Lower Haight. Then around 5 years ago I moved to Oakland and have been here since.

CZ: When did you fall in love with electronic music, and why? What got you hooked? Was club music always something you listened to?

WF: For most of my early life, my musical interests were definitely on the weirder side, and more guitar-oriented if anything. In Boston I spent a lot of time organizing and going to small DIY basement shows with friends. I started learning more about electronic music when there was this shift in the noise scene to techno, I think around 2011, which is also coincidentally when I moved to CA.

Before that, my main exposure to it was IDM and UK dubstep, although I was also into adjacent genres like industrial and krautrock. I started going to electronic shows and dance parties in SF and digging into the history of house and techno, it was really exciting to find out that there was so much I didn’t know and hadn’t heard. I think I had this false narrative in my head that unless music was challenging to listen to in some way, it wasn’t worth listening to at all.

After hearing a certain type of experimental music for so long, dance music was really refreshing because it was fun and cathartic to listen to in a way I hadn’t known before. Things like learning to appreciate MCs and the surprising ways that samples were being used, and going to clubs to dance instead of watching a band play unlocked new ways to enjoy music for me.

CZ: When did you start DJing? What inspired you? I might be wrong, but don’t you have a background in radio DJing?

WF: Yes! In high school I had a radio show at a low-power community radio station in my hometown of Portsmouth, NH and also at my college radio station, WMFO at Tufts. It was definitely just traditional “radio-style” DJing in that I wasn’t really doing any mixing, mostly using it as an opportunity to explore and curate music. I’ve also enjoyed putting together mixes with specific themes I was into like gamelan (I practiced gamelan at Tufts and with Gamelan Sekar Jaya in Berkeley) or italo disco, mostly just for fun / for myself.

I got into mixing after my partner Dan got me into collecting records and taught me how to beatmatch on turntables. Beatmatching made mixing a lot more fun and dynamic, and at the same time I was seeing initiatives around making club DJing more accessible. Seeing how other DJs used the medium to produce unexpected results really inspired me to keep practicing and become better at expressing myself through DJing.

CZ: Speaking of radio DJing — I know you and your partner Dan have been working at a regular radio show from your house for some time now. Where’d the idea come from? How do you put the shows together?

WF: The idea came from both of us wanting to dedicate time to keeping up the practice of mixing while also being an opportunity for us to show each other new music we’d come across that week. When we first started doing it, I was still pretty bad and it was nerve wracking to practice on a live stream, but doing it weekly helped me personally a ton in terms of developing skill, thinking on my toes, and not fretting too much over small mistakes. Not a lot of people actually tune in live, but we treat it as our own little ritual that we keep ourselves to.

In terms of putting the shows together, we actually don’t plan anything out with each other beforehand, haha. We just each have some music we want to play that week and mostly wing it b2b with some solo runs in between. Sometimes one of us will say, oh I have a bunch of this bpm or that vibe this week, and the other will accommodate that too. Despite that though, we usually end up with some pretty decent mixes!

CZ: And on that note, tell me about producing music, too. I know you record with Dan as Motoko & Myers. Do you produce solo work?

WF: Yeah, the Motoko & Myers project has been really fun to collaborate on, and putting together the Future Times remix release was amazing too! I have produced some solo stuff here and there, but as of right now I’m not focusing on producing. I tend to really get in my own head about these things and I’ve found it better mentally to take a step back and just be a consumer of the tons of amazing music being released, especially now. Who knows, that might change in the future though.

CZ: Tell me about your AYLI mix. How’d you put it together? Is there a concept or a theme behind it?

WF: The theme I was going for is peak time emotion aka “i’m not crying it’s just the smoke machine” aka an expression of nostalgia for the club we’re all feeling right now. It’s also unnecessarily long because of the excess of music that I haven’t been able to play out that has been piling up.

CZ: Now that Covid has kind of laid the “music industry” flat, I wonder if you had any thoughts on what you think things will look like in six months, or a year, or whenever it’s safe for us to start going out and gathering again. What do you think will be different? What do you hope will change?

WF: It’s really hard to say since we don’t know how long this pandemic will last, especially with how the US government is handling it. I saw something on RA about how travel restrictions in Asia might create opportunities for more local artists to play clubs they wouldn’t have been able to play otherwise, and I wonder if something similar would happen here: an increase in local lineups.

Right now I think the music community is trying to figure out how to sustain itself and each other when we can’t go out and most of us have lost our incomes. It’s been really awesome to see all the momentum behind Bandcamp Fridays, and as events have been going virtual, it’s been nice to see the efforts being focused to support local scenes. Parallel to Covid though, as many of us are taking part in the movement to end police violence against black communities, I hope that promoters, labels, and artists will commit to increasing the diversity of their lineups and rosters, and to giving back to the marginalized groups that built so much of the culture they profit off of.

CZ: Lastly, tell me about some music you’ve really been digging lately. What’s keeping you company at home?

W: Just to name a few, I’ve really been digging SassaCyprigo! which was a tip from Kiernan Laveaux, the stuff that m. geddes gengras has been putting up on his Bandcamp lately, this incredible Speaker Music release, this really raw No Home album, this amazing Low Budget Aliens, new Ramzi, new Duckett, and these recent Equiknoxx and Gavsborg EPs.