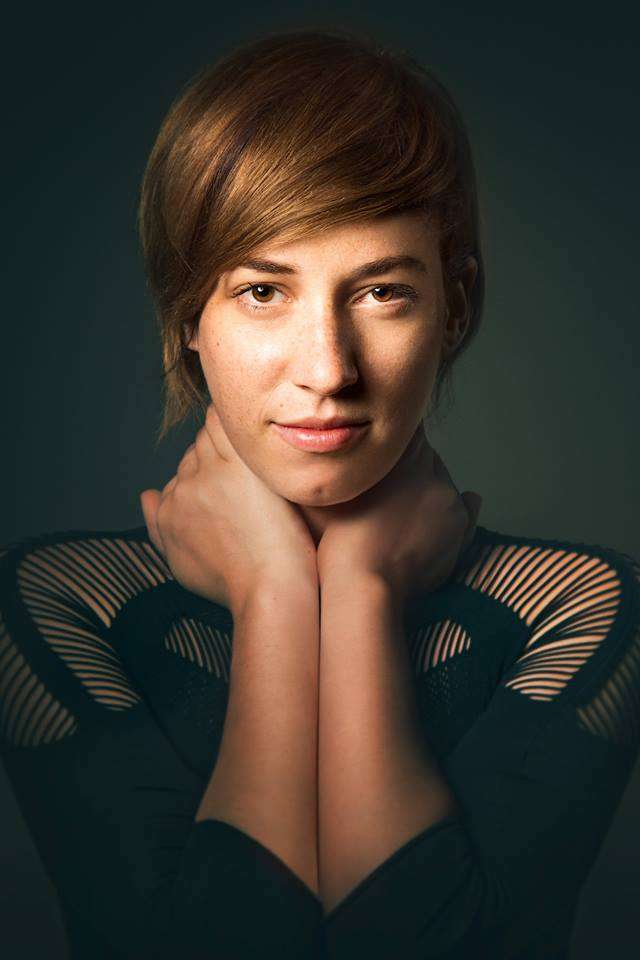 Christina Chatfield has been in the AYLI family since the beginning. For 10 years, she has been an As You Like It resident performer, playing live techno, improvised and not, on stages both big and small. Anyone who has caught her sets more than once will easily recognize her sound: tight, loop-focused acid techno with a particular interstellar feel. Personally, I’ve witnessed her live performances upstage a headliner on more than one occasion. She’s the real deal.

Now, after gracing As You Like It’s stages an untold number of times, she’s kicking off their record label. To be released on November 27, 2020, in commemoration of the four year anniversary of the Ghost Ship fire, her first release for As You Like It Records, Ascent / Descent, captures the twisting, tunneling spirit of her live performances. Backed by remixes from Tin Man and Noncompliant — both AYLI mainstays in their own right — plus Lily Ackerman and Tape Ghost, the record highlights American techno in a way that strikes me as distinctly As You Like It. Altogether, the record feels like a snapshot of Chatfield’s live performance, but cut for the club.

Read on to learn more about Christina Chatfield’s practice and work, her first record for AYLI and an upcoming ambient LP on Mysteries of the Deep, and listen to the podcast she’s just put together — AYLI #101 — that feels as close as you can get these days to catching her at the club.

CC: I grew up in Dayton, OH and spent several years in Boston, MA before heading west to SF. I got a job doing sound design in the Bay Area, and wanted to see what life was like on the West Coast.

CZ: When did you start producing your own music? What were your first inspirations?

CC: I started producing music about 16 years ago. What I really remember first sparking my interest in electronic music was early Nine Inch Nails, and I’ve always loved older synth-driven music like new wave. Then as a teenager in Dayton, I stumbled upon the amazing electronic music scene that was happening all over the Midwest. That’s when I discovered house and techno, just going to parties and hearing artists from around the region. I knew early on that I wanted to make the music I loved hearing so much, and wanted to contribute to that scene.

CZ: How has your process changed over the years? Are you primarily using hardware or software these days? Related: As your process has changed, has your sound changed, too?

CC: When I first started producing music, I was doing everything with a laptop. Reason was the first DAW that I dabbled in, then I moved on to Logic. I remember getting frustrated that software synths just didn’t sound as good as hardware synths at the time. The sound of analog filters, that vintage Moog sound, software synths just couldn’t reproduce that to my ears. I will say that has completely changed these days, software synths have come a very long way. But, that’s what first pushed me towards hardware was chasing that analog sound, as cliché as that may be.

Once I started using hardware, I realized that I didn’t just like the sound more, I liked the experience of using it more. I still prefer to use hardware to this day, because it feels like an instrument and I work faster with it. I’m not “anti-laptop” by any means though, I have a laptop running Ableton as the central brain of my studio. I’ve just found that when I’m only using a laptop, I will edit something forever… and ever.

A few years ago, I decided to set some creative boundaries and limit the hardware tools I was using to the bare minimum: a couple of drum machines, 303 clones, and an Eventide Space reverb pedal. That’s when the stripped-down acid sound started coming into my live sets. Purposefully limiting my tools like that led me to crank out tons of material for live sets, and I wanted to make music that sounded like the things I heard at parties growing up. Lately though, my musical “pendulum” is swinging back towards a wide sonic palette and I’m re-introducing more gear into the equation.

CZ: Speaking about your own music productions: you’ve got some exciting news to share. Hope I’m not letting the cat out of the bag by announcing that you’ve got an EP coming out soon, launching AYLI’s very own record label, and an LP coming later this year on Mysteries of the Deep. Tell me about these records! I know they occupy different sounds and moods and represent different facets of your sound. What are they all about?

CC: The AYLI record is one that I’m super excited about. I’ve been a resident artist for AYLI for over 10 years, so I’m really happy to be a part of the label launch. The sound of the record is definitely acid, and the vinyl has remixes from Tin Man and Noncompliant who are both artists I highly respect. There’s a track on the B-side called “Descent” that’s held a special place in my live sets over the last year, and I can’t wait to put it out.

The Mysteries of the Deep record is going to be a full-length ambient album. I started experimenting with ambient about 4 years ago, and playing ambient live sets. I put some of those sets up on Soundcloud and the folks from Mysteries reached out to ask if I’d be interested in putting out an album with them. I absolutely love what Mysteries of the Deep is all about, and the sound of their label. So it’s a huge honor to be working with them, and it’s also going to be my first full-length album. When it comes to ambient, there’s one artist in particular who gives me a ton of inspiration in the studio: The Detroit Escalator Company. A couple of the tracks on the album are very influenced by their sound. There are a couple tracks that are on the darker side as well — the album is really just a reflection of my mood during this tumultuous year.

CZ: For many years, I knew you mostly as a live musician. Your music was grounded in live performance and improvisation. Would you say that’s still the case? Has committing to a dedicated release changed the way you approach your own music or the way you work?

CC: I will say, without a doubt, it comes way more naturally to me to play longer sets or just jam on hardware. When you’re playing a longer set, the music doesn’t need a beginning or end, songs just flow from one into the next. Finishing and releasing a track means that it has a beginning, a middle, an end — that part is very difficult for me, and I think that’s why I’ve historically been drawn to live performance and recording podcasts.

It is a personal goal of mine to put more emphasis on releasing music. When it comes to the records that are coming out this year, I fell into the “perma-edit” trap for a long time as I was trying to finish them. I had to remind myself that it’s a trap, sometimes you just have to draw a line in the sand & call something “done.” This is an ethos I hope to keep moving forward.

CZ: Tell me about your AYLI podcast. It’s all your own work, but how did you put it together? Is it a reflection of work you’ve been creating recently?

CC: I made some new material for that podcast, which is definitely more in the direction my sound will be taking in the future. I’m starting to meld more ambient soundscapes into techno, which seems like a natural progression of my sound since I’ve been making more & more ambient over the years. I also wanted to include a couple of the tracks from the AYLI record in the podcast, and then the rest is my usual acid techno.

CZ: You’ve got a slew of remixes included on your EP for AYLI Records — Noncompliant, Lily Ackerman, Tape Ghost. How’s that experience been? Have you ever had someone remix your work before? What’s it like listening to their final interpretations?

I really respect all of the remix artists on this record, and I loved hearing what they did with the tracks. Having Noncompliant on the record is especially fun for me, because she’s one of the artists I used to regularly watch as a teenage raver in the Midwest. Tin Man is obviously a master of acid techno, so it was a huge honor to have him on the record. I love the jacking acid remix he did of “Ascent.” Lily Ackerman was always one of my favorite San Francisco DJs before she left for Berlin. I really like what she did with “Energies,” the remix has a totally different vibe from the original. Tape Ghost’s remix of “Descent” is exactly the kind of spacey techno that I love.

This record is not the first time other people have remixed my music. I think it’s fun to hear the different styles that come from each of the remix artists, their individual sound really comes through in each of their interpretations.

CZ: How has COVID-19 influenced your own music-making? Have you found yourself open to creative work or roadblocked? I also wonder if it’s changed the sound of the music you find yourself inspired to produce or listen to — personally, I have all but given up listening to “club music” over the past three or four months.

CC: I completely understand, I am in the same boat. I do love dancefloor music, but I like it in the moment, preferably over a loud sound system. I’ve never really listened to techno much at home — the exception being when I’m working in the studio. And when I am working, I definitely get into it. But ever since I’ve been quarantining, when I’m working on music, the bpm gradually gets slower and slower, until ultimately there’s no beat at all and I’m basically just making ambient. I drift between dystopian ambient — we’re in the middle of a pandemic after all — and dreamy, melodic ambient that keeps my spirits up. These are the sounds that are coming very naturally to me in the studio these days.

CZ: And on that note I’d love to hear about some music you’ve been listening to lately. What’s occupying your ears these days?

CC: I’ll list the most recent record purchases in my household: the latest addition is Alva Noto’s Xerrox Vol. 4. I also really like Shawn Rudiman’s latest record Conduit — that’s techno I can listen to at home. It’s one of the reasons I like that record so much. Caterina Barbieri’s Ecstatic Computation record is beautiful. Legowelt’s Secrets After Dreams has been a great quarantine soundtrack. Beyond that, my partner Zak and I listen to a lot of obscure film scores and Japanese synth music from the 70s like Haruomi Hosono’s Cochin Moon. Shoegaze and 80s goth records are also in constant rotation in our household.